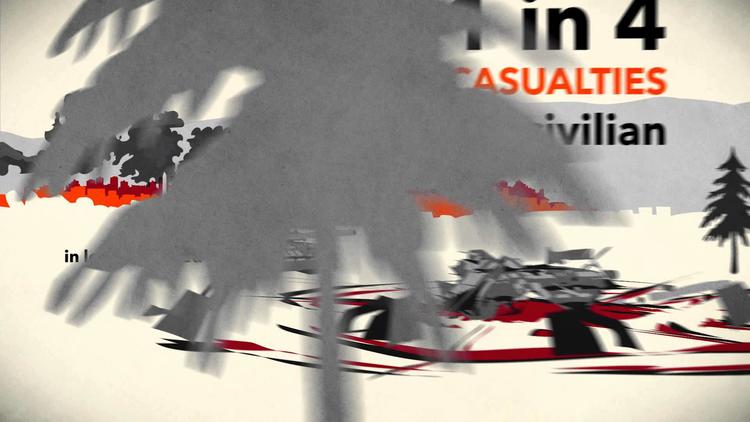 Civilian casualties from explosive weapons rose by 54 percent in 2015 compared to 2011.

More than three-quarters of those harmed by explosive weapons in 2015— bombs, missiles and mortars— were civilians, with 30 of them killed on average every day, according to a new study from Action on Armed Violence or AOAV, a non-governmental organization based in the the United Kingdom.

“The last 12 months have seen explosive weapons, both manufactured and improvised, bring appalling suffering to civilians across the world,” says the report, released Tuesday. At least 33,307 civilians were killed or wounded by such weapons in 2015, according to AOAV. That figure is 54 percent higher than that recorded in 2011.

But, the report says, “Many more people are affected by explosive weapons than can possibly be hinted at by our casualty figure.”

More than 10,000 deaths and injuries were recorded in Syria alone, a 39 percent increase from the year before. The worst incident of 2015 occurred in Douma, Syria, when 620 civilians were reportedly killed or injured when “Multiple air-dropped bombs hit (a) marketplace.”

At least 9,200 civilian casualties were the result of bombs and missiles launched from the air, according to AOAV, a 57 percent increase from 2014. “When explosive weapons were used in populated areas,” the report notes, “92 percent of those killed and injured were civilians.”

Syria was followed by Yemen, Iraq, Nigeria and Afghanistan in terms of being the worst places in the world for civilians. Significant increases in explosive weapon-related civilian casualties were also recorded in Turkey (7,682 percent), Egypt (142 percent) and Libya (85 percent).

There was actually a 20 percent decrease in the number of of “explosive weapon incidents” in 2015 compared to the year before. That means “there was a higher average lethality than previous years,” according to AOAV, “a reflection of the increasing use of explosive weapons deliberately targeting populated areas.”

Act on Armed Violence (from last year): “The global impact of explosive weapons on civilians in populated areas”