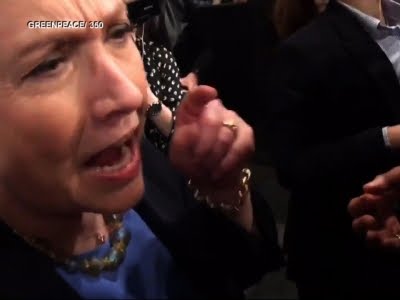 Hillary Clinton told Greenpeace she was going to reject fossil fuel donations yet her campaign has received over US$4.5 million from the industry.

Clinton didn’t sign up for the Greenpeace cause, that asked all presidential candidates to rebuff all donations from the industry, but she responded by saying she will reject fossil fuel donations given to her campaign although she has been funded by oil and gas firms, according to Eva Resnick-Day who questioned Clinton at a campaign rally.

“While we appreciated Hillary’s response, the first step a candidate can take to stop fossil fuels is to stop taking fossil fuel money,” Resnick-Day wrote.

“That money matters when we hear great things about climate in Clinton’s speeches, but want to be sure she’ll truly listen to the people when she is in office.”

“For instance, she supports a Department of Justice investigation of ExxonMobil and yet she takes money from an Exxon lobbyist” she continued.

The activist cited data compiled by Greenpeace’s research department that claim Clinton’s campaign and the Super PAC supporting her have “received more than US$4.5 million from the fossil fuel industry during the 2016 election cycle” despite informing the group she wouldn’t be accepting donations from such companies.

Resnick-Day encouraged the lawmaker to sign the #FixDemocracy as it would send “a strong signal to our country and fossil fuel companies that it’s time to keep it in the ground, not just for the future of our planet, but for people that are living on it.”

Clinton was filmed ranting at Resnick-Day after she asked if she would act on her “word to reject fossil fuel money in the future in your campaign?”

Clinton quickly lost her patience, her smile turned into a scorn and the candidate started yelling, aggressively pointing at her, “I do not have — I have money from people who work for fossil fuel companies (…) I am so sick of the Sanders campaign lying about me,” showed a video that Greenpeace uploaded on its
YouTube channel.