(Beirut) – The extremist armed group Islamic State should urgently release Yezidi women and girls they abducted in 2014, Human Rights Watch said today, following new research with recent escapees who were raped and traded between members before they fled. [The so-called] Islamic State (also known as ISIS) also routinely imposes abusive restrictions on other Iraqi women and girls and severely limits their freedom of movement and access to health care and education in areas under its control, Human Rights Watch said today.

In January and February 2016, Human Rights Watch interviewed 21 Sunni Muslim Arab women from the Hawija area of Iraq and 15 women and girls from the Yezidi minority ethnic group, all of whom had fled ISIS-controlled areas, most in late 2015. Several of the Yezidis, abducted by ISIS in mid-2014, had spent more than a year in captivity. They described being forcibly converted to Islam, kept in sexual slavery, bought and sold in slave markets, and passed among as many as four ISIS members. Human Rights Watch first documented systematic rape of Yezidi women and girls in early 2015.

“The longer they are held by ISIS, the more horrific life becomes for Yezidi women, bought and sold, brutally raped, their children torn from them,” said Skye Wheeler, women’s rights emergencies researcher at Human Rights Watch. “Meanwhile, ISIS’s restrictions on Sunni women cut them off from normal life and services almost entirely.”

The Sunni women Human Rights Watch interviewed had fled areas under ISIS control since June 2014 in western Kirkuk governorate and had arrived in areas controlled by forces of the Kurdish Regional Government (KRG). All of the Sunni women and girls reported severe restrictions on their clothing and freedom of movement in ISIS-controlled areas. They said they were only allowed to leave their houses dressed in full face veil (niqab) and accompanied by a close male relative. These rules, enforced by beating or fines on male family members or both, isolated women from family, friends, and public life.

The longer they are held by ISIS, the more horrific life becomes for Yezidi women, bought and sold, brutally raped, their children torn from them. Meanwhile, ISIS’s restrictions on Sunni women cut them off from normal life and services almost entirely.

Families living under ISIS also face intensified suffering from escalating food prices and cash shortages, especially since Iraq’s government stopped sending civil service salaries to ISIS-controlled areas in mid-2015. They also live in fear of airstrikes by United States-led coalition and Iraqi government forces. Those interviewed said the combination of food shortages, fear of airstrikes, and abuse by ISIS led them to flee.

Eleven of those interviewed reported restricted access to health care or education because of discriminatory ISIS policies, including rules limiting male doctors from touching, seeing, or being alone with female patients. In more rural areas, ISIS has banned girls from attending school. ISIS fighters and female ISIS “morality police” hit, bit, or poked women with metal prongs to keep them in line, making them afraid to try to get services they needed.

Airstrikes on health and education facilities where ISIS fighters were present also made women afraid to use these facilities. Women cited the September 2014 bombing of Hawija hospital, by Iraqi government forces according to news sources, and the June 2015 bombing of a market in Hawija by coalition forces, both of which allegedly killed large numbers of civilians, as well as smaller attacks.

KRG officials say that ISIS fighters in Iraq and Syria continue to hold about 1,800 abducted Yezidi women and girls. Human Rights Watch has not been able to confirm these figures, but the United Nations has cited allegations, based on Yezidi officials’ estimates, that as many as 3,500 people remained in ISIS captivity as of October 2015. Many of the abuses, including torture, sexual slavery, and arbitrary detention, would be war crimes if committed in the context of the armed conflict, or crimes against humanity if they were part of ISIS policy during a systematic or widespread attack on the civilian population.

The UN Office for the High Commissioner for Human Rights said in March 2015 that ISIS may have committed genocide against the Yezidi. Although Iraq is not a party to the 1948 Genocide Convention, its provisions are widely recognized as reflecting customary international law. The Genocide Convention prohibits killings and other acts “committed with intent to destroy, in whole or in part, a national, ethnical, racial or religious group.”

The abuses against Yezidi women and girls documented by Human Rights Watch, including the practice of abducting women and girls and forcibly converting them to Islam and/or forcibly marrying them to ISIS members, may be part of a genocide against Yezidis. Women also reported ISIS members taking their children from them, physically abusing their children, and forcing them to pray or take Islamic names.

Iraq has not joined the International Criminal Court (ICC) but should do so to allow the court’s prosecutor to investigate and prosecute crimes against humanity, war crimes, and genocide committed in Iraq by individuals belonging to any of the parties to the conflict. The authorities could give the court jurisdiction over serious crimes committed in Iraq since the day the ICC treaty entered into force, on July 1, 2002. The ICC has jurisdiction over serious crimes committed by the nationals of, or in the territory of, countries that are members of the court.

Small numbers of Yezidi women and girls continue to escape ISIS, according to KRG officials and nongovernmental organizations working with this population. Human Rights Watch interviewed 15 Yezidi women and girls, including seven who ISIS had kept in captivity for more than a year and four who had escaped in December 2015 or January 2016. The women and girls said ISIS bought and sold them repeatedly, often raped them, sometimes confined them in rooms for days, humiliated them, and beat their children or took away their children. 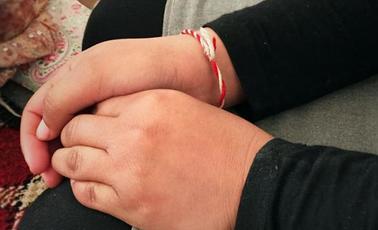 “Noor,”16, said an ISIS fighter raped her multiple times during two months in captivity. Deeply traumatized, she is one of the few Yezidi girls getting regular psychosocial treatment.

The Iraqi and Iraqi Kurdish governments and international donors should ensure adequate support services, including comprehensive, long-term psychosocial support for those who have escaped. Some services also have been provided for women who became pregnant during their captivity, but safe and legal abortion services are not available. The Iraqi national parliament and Kurdistan’s regional parliament should amend laws at least to allow safe and legal abortions for women and girls who have experienced sexual violence and who wish to terminate their pregnancies.

“ISIS attacks on women and girls, especially Yezidis, have created a new and terrifying crisis for women and girls in the region,” Wheeler said. “One way Iraq’s government can help these women is to change its laws and policies to better protect all women who have been subjected to rape.”

All Sunni women and girls interviewed by Human Rights Watch who fled the ISIS-controlled Hawija area to nearby areas under the control of KRG forces said they have subsequently faced further restrictions on their freedom of movement. After screening the women close to the frontlines, they said that KRG forces forcibly moved families, and some women and children traveling without a male companion, to the Nazrawa internally displaced persons camp, east of Kirkuk city. In at least five cases, families said they wanted to live elsewhere but were refused and five other women interviewed said that they had no choice but to go to the camp. Human Rights Watch found no indication that any of the women interviewed were under suspicion for any crime or security threat. The women said that KRG forces guarding the camp have also held identity documents, restricting residents’ freedom of movement through checkpoints outside the camp that require identity documents, and requiring them to return if they leave the camp. In at least three cases women said this has obstructed them from getting adequate health care.

Human Rights Watch appreciates that the KRG has welcomed hundreds of thousands of displaced Iraqis from elsewhere to reside for their protection in the Kurdistan region. However, practices that amount to forcing displaced people to stay in a camp would contravene the UN Guiding Principles on Internal Displacement, which state that citizens of a country have freedom of movement and the right to live where they wish and are protected from being “interned in or confined to a camp.” The UN refugee agency, UNHCR, which operates the Nazrawa camp, has asked Kurdistan authorities to remove restrictions. UNHCR has said the restrictions “are imposed in a manner disproportionate to any legitimate concern, including those related to security.”

Human Rights Watch wrote to the KRG on March 7, 2016, regarding these and other allegations. The government’s initial response of March 26, 2016, stated with respect to Kirkuk frontlines that for security reasons, “some segments of the local Arab citizenry whose homes and villages were located on the frontlines [a conflict zone] have been temporarily relocated to camps which are protected by Peshmerga forces. This precaution has been taken in the interests of these citizens as it ensures no harm can befall them by the ISIS terrorist group.”

The response further stated: “After the liberation of the village of Kharaba Rotah [Kharabaroot a short distance east of Malha] in Hawija district, 520 Arab families moved to secure areas under the control of Peshmerga forces.”

The KRG also said that they had removed families from Malha in order to protect them, but did not say why KRG forces had confined families in Malha for several weeks before moving them. Families forcibly moved from the Malha area to Nazrawa camp did not indicate to Human Rights Watch that they had felt themselves to be under threat from ISIS attacks in Malha.

4. No civilian should be transferred from his original place of residence in areas liberated by Peshmerga forces without sufficient legal or military rationale/justification.
5. The free movement of civilians in liberated areas is non-restricted within the framework of security and military regulations held in the Kurdistan Region. The exception to this is areas which are located immediately on the frontlines between Peshmerga forces and IS fighters.

6. International principles of human rights and humanitarian law must be observed with regards to civilians in areas located on the frontlines.

Human Rights Watch welcomes the response of the KRG and President Barzani’s order to comply with international human rights and humanitarian law issued to Peshmerga forces. Residents of Nazrawa camp, a long distance from the frontline in Kirkuk governorate, which is outside the Kurdistan Region of Iraq formally under the KRG, should have freedom of movement and residence. No restrictions other than those necessary to protect civilians in conflict should be placed on their freedom of movement and residence, Human Rights Watch said.

“Women fleeing abuses should not then face further restrictions on their mobility and their right to live where they want in their own country,” Wheeler said. “KRG security forces should abide by the presidential order government and stop placing restrictions on civilians who have escaped from ISIS control.” . . .