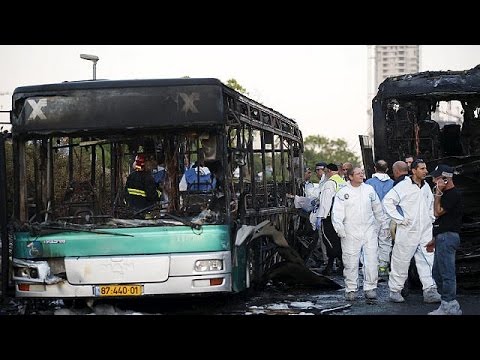 Israeli police spokesman Micky Rosenfeld reported that bomb disposal experts had identified the cause of the blast as an explosive device on the bus.

Israeli police spokeswoman Luba al-Samri initially said the Egged bus was empty at the time, and that the 21 injured were in a bus and a car located nearby at the time of the explosion. However, she later said investigations had revealed the explosion took place on the bus which was holding passengers.

Al-Samri listed the casualties as two people in serious condition, seven in moderate condition, and the rest suffering from light injuries.

She added that Israeli police forces, bomb experts, and firefighters were analyzing the situation to determine the circumstances behind the explosion.

A spokesperson for the Shaare Zedek hospital told Ma’an eight people were being treated there, including one in severe condition who was being operated. She said the seven others were in “very light” condition.

Israeli Prime Minister Benjamin Netanyahu condemned the explosion. “We will punish the terrorists behind the bus explosion in Jerusalem,” his spokesperson quoted him as saying. “Israel will put its hand on whoever prepared the bomb and sent the terrorists.”

“Civilian casualties are unacceptable and harmful to the struggle against the occupation,” Odeh, a Palestinian citizen of Israel, wrote on social media. “Netanyahu’s government is fueling the cycle of bloodshed. Only a political settlement will bring security to both (Israeli and Palestinian) people.”

While not claiming responsibility for the explosion, several Palestinian groups hailed the reported attack.

“We bless the Jerusalem operation, and consider it a natural reaction to the Israeli crimes, especially field executions and the desecration of the Al-Aqsa Mosque,” the Hamas movement said in a message on social media.

Meanwhile, Islamic Jihad said the explosion was a “strong message” that the Palestinian uprising was ongoing and alive, and that resistance was entrenched in Palestinian hearts and minds.

Al-Ashqar called on Palestinian resistance fighters and “Intifada youths” to carry out more “heroic operations that hurt the occupation and its settlers.”

More than 200 Palestinians have been killed by Israeli forces and settlers since a wave of unrest spread across the occupied Palestinian territory in October. The unrest has been marked by a surge of small-scale attacks carried out by Palestinian individuals — predominantly on Israeli military targets — which have left nearly 30 Israelis dead, with the majority of suspected Palestinian attackers shot dead on site.