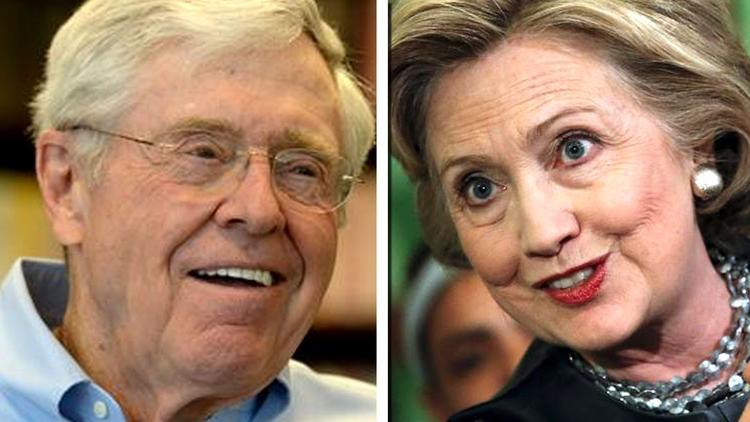 When the oligarchs speak, take it with a grain of salt. Or a wheelbarrel full.

‘We would have to believe her actions would be quite different than her rhetoric. Let me put it that way,’ says billionaire industrialist and far-right ideologue

But in an interview on ABC’s “This Week” which aired Sunday morning, billionaire industrialist and philanthropist of the far-right Charles Koch says given the performance of former president Bill Clinton and her own record, he thinks “it’s possible” that a Hillary Clinton presidency would be better at fulfilling his libertarian and pro-business agenda than any of the Republicans currently in the running.

Asked by journalist Jonathan Karl if he could actually see himself supporting Clinton in a hypothetical general election against Donald Trump, Ted Cruz, or John Kasich – Koch smiled, but didn’t say no.

“We would have to believe her actions would be quite different than her rhetoric. Let me put it that way,” Koch responded.

The clip from the interview, first posted online Saturday evening, created a healthy round of headlines overnight.

Though Charles Koch—who along with his brother David Koch controls a network of right-wing think tanks, advovacy groups, and Super PACs with hundreds of millions of dollars from their massive private fortune—has previously expressed his displeasure with this year’s Republican primary, his latest comments remain a curious admission.

Last month, the Clinton campaign and her surrogates came under fire in progressive circles after suggesting Bernie Sanders was somehow aligned with portions of the Koch Brothers’ anti-immigrant agenda ahead of Florida’s primary. Later, following a debate just prior to the Michigan primary, pro-Clinton Super PAC “Correct the Record” suggested Sanders’ opposition to the Export-Import Bank was in sync with the positions of the Koch Brothers.