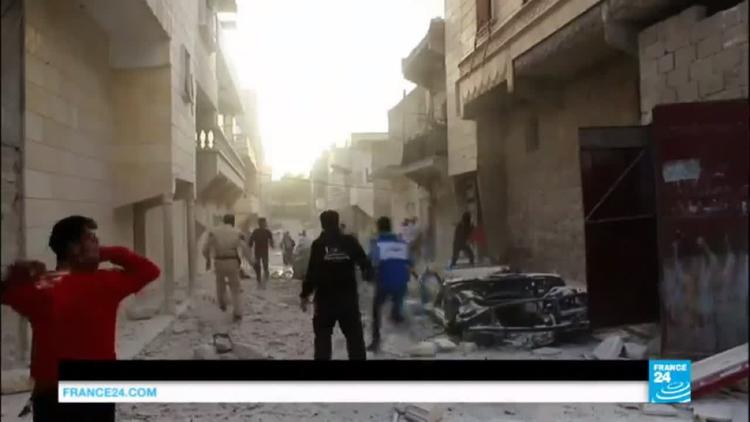 There were five major stories in the US and European press about Syria today:

1. The cessation of hostilities is in danger of breaking down (typically Western politicians and press blame this on the Syrian regime, but as far as I can tell, it is because of a counter-offensive by al-Qaeda-led rebel groups).

2. The Syrian regime held elections in the areas where it is strong (about 70% of the population lives under regime rule). The French denounced these elections as a sham, and they are likely to return a 250-MP parliament dominated by the ruling Baath Party, a seedy Stalinist police state. Why bother to hold these phony elections?

3. Negotiations began again in Geneva between the regime and the non-radical rebels. UN envoy Steffan de Mistura said he wanted them to focus on political transition, that is, the crafting of a new constitution and the holding of new nationwide elections. The opposition is insisting that Bashar al-Assad step down before such a transition can be accomplished, while the regime says that al-Assad is a red line. The Americans and Russians want the two sides to leave the question of the presidency until later and concentrate on the elements of transition below that level, e.g. the constitution and new electoral rules.

4. Daesh (ISIS, ISIL) has somewhat reasserted itself north of Aleppo and in the hinterlands of Damascus. But it was never part of the ceasefire.

5. If the negotiations fall apart and the civil war heats up again, the US is planning to give medium weaponry, including manpad anti-aircraft munitions, to the “vetted” rebels–who, however, seem to be perfectly willing to cooperate on the battlefield closely with al-Qaeda, so that the CIA weaponry will benefit, and some will go to, al-Qaeda (Nusra Front), which reports to Ayman al-Zawahiri, one of the masterminds of the 9/11 attacks.

As I said, as far as I can tell, the opposition’s charges that the regime spoiled the cessation of hostilities is simply not true. Before the ceasefire began, the regime had taken back control of the main route from Damascus to Aleppo, including small towns southwest of Aleppo. I wrote Sunday,

“As the Syrian Arab Army and its Iranian and Iraqi militia allies have been busy to the east at Palmyra, al-Qaeda has spearheaded the reconquest from the regime of al-Eis, al-Khalidiya, Birna and Zitan, small towns along the strategic M5 highway linking Aleppo to Idlib Province (a province dominated by al-Qaeda and its allies). These advances are mainly al-Qaeda’s, or al-Qaeda’s in conjunction with allies. A Shiite site observed, “The attack on Zitan and Birneh is to be led exclusively by Jabhat al-Nusra fighters. Nevertheless, yesterday’s capture of al-Khalidyah was carried about by joint troops of Jund Al-Aqsa, Ahrar ash-Sham, Ajnad Al-Sham, Jabhat Al-Nusra and the Free Syrian Army’s 13th division.” The 13th Division of the FSA is a “vetted” group that receives CIA-supplied weaponry such as anti-tank t.o.W. munitions, which is to say that the United States is in bed with al-Qaeda in taking al-Khalidiya from the al-Assad regime.”

Aljazeera, which is sympathetic to the rebels, nevertheless admits that the some 100 fighters killed altogether on both sides in the past four days in the north died because the Syrian Arab Army and its militia allies have been trying to get al-Eis, al-Khalidiya, Birna and Zitan back from al-Qaeda and its local allies. The charge that there is an assault brewing on east Aleppo, a rebel stronghold, may or may not be true, but that isn’t anyway the story here. The story is that some elements of the Free Syrian Army have broken the ceasefire, and have de facto allied with al-Qaeda. these are the guys you want to give shoulder-held weapons that can bring down an El Al airliner?

As for the elections held by the regime, they are intended to demonstrate to the West that the Baath Party and President Bashar al-Assad are genuinely popular, and that they can’t just be set aside– they have millions of votes behind them. (This is North Korean thinking; in fact, the West will dismiss the polls as coerced and phony, and holding them will do the regime little good). It is true that most Syrians prefer the regime to Daesh (ISIS, ISIL) or al-Qaeda (the Nusra Front).

Whether the negotiations will go anywhere in Geneva is a big question mark. Likely developments on the battlefield will be more important. If the ceasefire does not in fact fall apart, then the next elections will have to allow voting in de facto rebel-held areas, moving Syria toward a multi-party system.

As for the CIA repeating all the mistakes of 1980s Afghanistan in Syria, it boggles the mind. Isn’t Obama in charge of this policy? It doesn’t sound like he is.