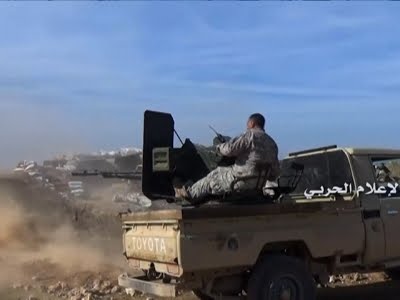 The London pan-Arab daily Al-Hayat reports that the rebel opposition allied with al-Qaeda broke the ceasefire Saturday morning, taking several villages and towns in the southern hinterlands of Aleppo. The attack was launched with suicide car-bombers who detonated their payload, targeting Syrian Arab Army troops and their allies, Shiite militiamen fighting with guidance from the Iranian Revolutionary Guards Corps.

The attack south of Aleppo came as the Syrian army had announced, after taking Palmyra, that it was marching on Qaryatayn, a town held by Daesh (ISIS, ISIL) in southern Homs province just to its west.

The organizations that broke the ceasefire and took territory included the Nusra Front (al-Qaeda in Syria), the Turkestani Islamic Party, the Levant Brigade, the Freemen of Syria (Ahrar al-Sham), Division 13, and other rebel groups. They managed to take al-Is, Tel al-Maqali` and Tel al-Is. Al-Qaeda had launched a broad attack that began midday Thursday, with both sides suffering dozens of dead and wounded. Some of the fighting was between al-Qaeda and the other rebel factions.

BBC Monitoring conveys from the Russian press on Saturday,

“Syrian troops have been forced to abandon positions in the area of Al-Is in Aleppo province after artillery shelling and an attack by the Al-Nusra Front . . . , a Russian Defence Ministry spokesman told journalists on 2 April, as reported by Russian state news agency RIA Novosti (1607 gmt).

“Near the centres of population of Al-Is, Abu-Ruwayl and Khan-Tuman in Aleppo province, Al-Nusra bandit units, after 30-minute artillery barrage, went on the offensive and forced government troops, who were under orders not to respond to provocations, to abandon their positions near Al-Is and to retreat to the northeast,” Sergey Kuralenko, chief of the Russian Centre for the reconciliation of the warring sides in Syria, said.

The Al-Nusra Front has established control over groups that regard themselves as the opposition in areas south and west of Aleppo, Kuralenko told journalists, according to an earlier RIA Novosti report (1603 gmt).’

Meanwhile, the Syrian forces advanced on Qaryatayn, which Daesh had been using to attempt to cut Homs off. Dozens of extremist fighters were said to be killed or captured. In Palmyra to the east, Syrian troops discovered mass graves with bodies of women and children, massacred by Daesh during its rule there.

Al-Qaeda, which is important in the northwest of Syria from Aleppo to Idlib, had been put at a disadvantage by the ceasefire. There was a danger that if the even slightly more moderate factions lay down their arms when al-Qaeda and Daesh did not, the latter could be isolated and targeted by the regime and the Russian air force.

Al-Qaeda has therefore been angling for an end to the ceasefire, and may have gotten its wish this weekend. That development might be good for al-Qaeda but it would be bad for everyone else.