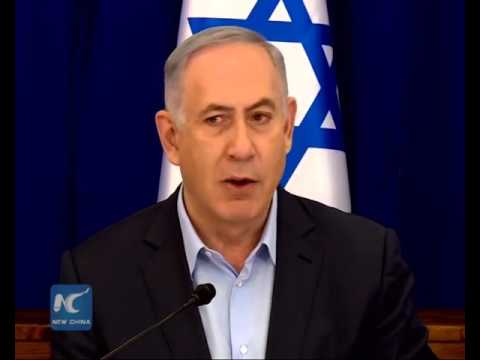 The far right wing regime of Binyamin Netanyahu pulled the stunt of holding its first cabinet meeting in the Occupied Golan Heights on Sunday, and Netanyahu engaged in some grandstanding, declaring that Israel will never relinquish this patch of Syria.

Israeli propaganda maintains that Israel is vulnerable to shelling from the Golan Heights. But Moshe Dayan admitted that

“he regretted not having stuck to his initial opposition to storming the Golan Heights. There really was no pressing reason to do so, he said, because many of the firefights with the Syrians were deliberately provoked by Israel, and the kibbutz residents who pressed the Government to take the Golan Heights did so less for security than for the farmland.”

Although the New York Times reported this story about Israeli provocations and the actual reasons for the occupation in the late 1990s, it today goes on repeating the old propaganda myths.

1. It is not illegal for Israel temporarily to occupy Syrian territory as a result of a war, as it did in Golan in 1967. But it is illegal for it permanently to annex the territory of a neighbor, according to the United Nations charter (Article 2, paragraph 4: “All Members shall refrain in their international relations from the threat or use of force against the territorial integrity or political independence of any state, or in any other manner inconsistent with the Purposes of the United Nations.”> Permanent annexation is an injury to the territorial integrity of another United Nations member, which is not allowed as of 1945.

2. The UN Charter was trying to ensure that the bad behavior of the Axis powers was not repeated. Mussolini occupied part of France in WW II and tried to annex it to Italy and settle it. We want the world to grow up and stop behaving the way Mussolini did. Israel as a country established by people who suffered from Axis war crimes has a special duty to uphold the UN Charter in ending aggressive warfare and annexation of neighbors’ territory.

3. Israel is setting a bad example through this aggressive expansionism. There isn’t any difference between what Moshe Dayan described as having happened in the Golan Heights in 1967 and Saddam Hussein’s invasions and attempted annexations of Iranian Khuzistan and then of Kuwait. In fact, powerful Bush administration officials such as Paul Wolfowitz worried that most of the case against the Saddam Hussein regime put forward as the basis for an American attack on it could also have been made against Israel.

4. Israel’s annexation detracts from the rule of law in a region that desperately needs a rule of law. The international community, especially the European Union, won’t put up with this sort of thing forever, either. There are already European government advisories to European companies not to do business with the Israeli squatter firms in the Palestinian West Bank, since it could open them to being sued in European courts. The same will be true of Golan.

5. The Israeli occupation of the Golan involves outright theft of Druze-owned land by the Israeli government and the squatters it backs. This illegality on the level of how families’ property is usurped mirrors the international illegality of the annexation of the whole territory.

6. Further, the international community has a vested interest in restoring Syrian territorial integrity once the civil war is ended. While Syria may move to a federal system, it is likely to be reconstituted as a united state, and the legitimacy of that new government will depend on it pressing its claim for all Syrian territory. Indeed, the al-Assad regime was weakened in the first place in the eyes of Syrian by its weakness in the face of Israeli aggression.

7. Israel’s belligerent declarations that it will never return its ill-gotten gains set the grounds for some future war. Syria won’t be a basket case forever, and Syrians are never going to accept the loss of the Golan. There has been enough war in the Levant; we should see to it that unnecessary casi belli or grounds for future wars are set aside and resolved.

It would be legitimate for Israel to negotiate the return of the Golan Heights to Syria as part of a peace process (which Prime Minister Ehud Barak seemed willing to do only 15 years ago). But it is immoral, illegal, and destructive for Tel Aviv to seek permanent annexation of territory won in war. As I have pointed out, Iran really was brutally attacked by Iraq in 1980, and was subjected to an 8-year war, and yet Tehran did not seek to retain or annex Iraqi territory once the fighting ended in 1988. In this regard, the Islamic Republic is more exemplary than the State of Israel.

2. Press TV: “Syria vows to use ‘any means necessary’ to take back Golan Heights”