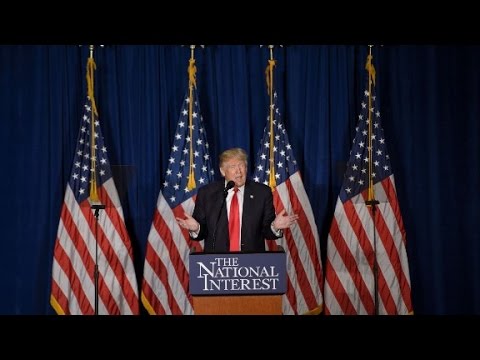 Donald Trump tried his hand at foreign policy on Wednesday, and the results weren’t any prettier than his incessant forays into domestic policy. He does not know anything serious about either one, but of course his fund of ignorance is far deeper when it comes to the rest of the world. Nor was there much original, except for the way he mixed things up. For the most part, on issues like Iran, Israel and international commitments and obligations, Trump’s positions aren’t all that different from most other Republicans. His opposition to democratization policies is just the old James Baker/ George H. W. Bush realism, hearkening back to a time before the rise of the Neoconservatives in the regime of W.

Trump praised the US intervention during World War II to defeat fascism and to democratize Europe and Japan.

He then went on to denounce all subsequent attempts to defeat other fascisms and democratize anything else. And while George W. Bush-style muscular Wilsonianism is a failure, the US can nudge others toward more democratic practices and better human rights through aid and other indirect means (something Jimmy Carter started with regard to the colonels in Latin America); Trump isn’t interested in that kind of thing, either.

He also showed himself in love with authoritarians abroad, perhaps seeing people like Vladimir Putin as soul mates.

His description of what has happened in the Middle East in the past five years is pure fiction:

“They just kept coming and coming. We went from mistakes in Iraq to Egypt to Libya, to President Obama’s line in the sand in Syria. Each of these actions have helped to throw the region into chaos and gave ISIS the space it needs to grow and prosper. Very bad. It all began with a dangerous idea that we could make western democracies out of countries that had no experience or interests in becoming a western democracy.

We tore up what institutions they had and then were surprised at what we unleashed. Civil war, religious fanaticism, thousands of Americans and just killed be lives, lives, lives wasted. Horribly wasted. Many trillions of dollars were lost as a result. The vacuum was created that ISIS would fill. Iran, too, would rush in and fill that void much to their really unjust enrichment.”

Trump manages to blame President Obama for the 2011 Arab uprisings (which Obama and Hillary Clinton did not support in Tunisia and Egypt until after they were inevitable). The idea that the US promoted “democratization” in those two countries is completely laughable. It promoted dictatorship for decades and then after people massed in the streets, Washington just acquiesced in whatever outcomes the people of the place could arrange. It’s giving military dictator Abdel Fattah al-Sisi arms just the way it did his predecessor.

Obama in the Middle East has for the most part (with the exception of Libya) been a defensive realist. He came into office trying to establish relations with the Syrian government, not trying to overthrow it. He sent an ambassador to Damascus. It was the Republicans who wanted to overthrow al-Assad.

Then, how was Obama opposing the gassing of Syrian civilians a bad thing? Is the use of poison gas by the al-Assad regime on its own people one of those strong institutions Trump feels shouldn’t be interfered with?

We already know that Trump believes Arabs should be ruled by dictators. The problem is that as of 2011, most people in the region refused to put up with the dictators, and the dictators were either overthrown or held on by genocidal means. The US didn’t intervene in any way that mattered in Syria or Yemen. Does Trump think Washington should have intervened on the side of the dictators? The rise of ISIL in eastern Syria had nothing whatsoever to do with Obama and there was nothing any American president could have done to forestall it. ISIL grew up in Iraq under American military occupation run by a Republican president, that is, under the nose of 160,000 US troops on patrol.

Trump also complained about the US not doing enough for the Christians of the Middle East. As if Donald Trump ever cared about Christianity in his whole life. But the exodus from Iraq of its ancient Chaldean community was caused by the US Republican Party’s occupation of that country. Not sure what Trump thinks the US did in Syria to cause some of its Christians to flee. Trump seems to support the Syrian regime of Bashar al-Assad, which has been using heavy military equipment against its own people, and Christians have gotten caught in the crossfire.

Then Trump again went after NATO. His implication that the US pays an unfair share of direct costs for it is incorrect— member countries pay proportionally based on GDP. As for indirect costs of collective defense, Trump seems to be complaining that other countries don’t have the kind of bloated military budget that the US has (nor do they need it; Germany doesn’t have bases in Africa and Asia).

“Israel, our great friend and the one true democracy in the Middle East has been snubbed and criticized by an administration that lacks moral clarity. Just a few days ago, Vice President Biden again criticized Israel, a force for justice and peace, for acting as an impatient peace area in the region.”

Biden, who has spent his whole political career championing Israel, was criticizing the Likud government’s reckless colonization of the Palestinian West Bank as a way of preventing the emergence of a Palestinian state, thus creating a permanent Apartheid. This policy can only deeply harm Israel in the medium to long term, and Biden was expressing some tough love. Trump’s meaningless platitudes about Israel being a “friend” and a “democracy” are just boilerplate mouthed by most professional politicians. A country of 8 million that militarily occupies a further 4.5 million stateless people isn’t a democracy, it is an Apartheid regime. A regime like that of Netanyahu that constantly lobbies for the US to go to war (Netanyahu promised us the Iraq aggression was a good idea and wanted us to bomb Iran) isn’t acting in that way as a friend.

Even pillars of the American Jewish establishment, such as Seymour D. Reich, former chairman of the conference of major Jewish Organizations, are beginning to speak out about the increasingly undemocratic policies of the Likud in Israel. Coddling Netanyahu, as Trump suddenly wants to do after earlier talking about being even-handed, is doing no favors to Israel.

Contrary to the image Trump likes to project that his policy ideas take on the Republican Establishment, he isn’t saying anything new. Past Republicans were really devoted to Middle Eastern dictators like Egypt’s Hosni Mubarak. GOP isolationism and resentment of US spending abroad has usually focused on the United Nations rather than on NATO, but the latter has been slammed when it is insufficiently docile. Former secretary of defense Donald Rumsfeld put down France and Germany for their opposition to the illegal war of aggression on Iraq, calling them “Old Europe,” praising instead the eastern European countries such as Poland that were eager to join the coalition of the willing.

Likewise, his attacks on the UN Security Council diplomatic deal with Iran to require that the latter’s nuclear enrichment program remains purely for civilian purposes is indistinguishable from that of all other GOP politicians. And it is just as wrong-headed, since the deal has excellent safeguards against weapons research and has already resulted in the mothballing of Iran’s planned heavy water reactor at Arak, which could have been used to produce fissile material.

Ironically, for a speech decrying the current posture of Washington in the world as a mishmash of incompatible goals, Trump’s speech exhibited the very flaws he discerned in American foreign policy.