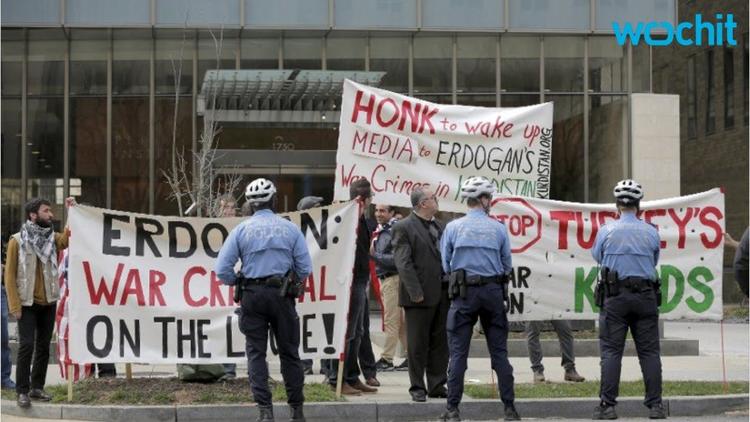 Turkish President Erdogan visited Washington DC this week to participate in the deliberations on nuclear weapons. He brought with him some bad habits and some bad actors in his security detail, according to WaPo’s Ishaan Tharoor.

Then when veteran journalist Amberin Zaman approached the Brookings Institution where Erdogan was speaking she was roughly turned away by Erdogan’s security detail. They called her a “PKK whore.” Tharoor reprinted the below tweet in his report:

It is alleged that Erdogan’s security men assaulted the demonstrators, and even DC police.

The National Press Club, as Tharoor pointed out, took the unusual step of issuing a press statement condemning Erdogan:

According to published news reports and multiple tweets from eyewitnesses, Erdogan’s security team manhandled reporters at the Brookings Institution ahead of a speech by Erdogan.

The Turkish leader’s bodyguards sought to physically remove one journalist from the event, kicked another and threw a third, a woman, to the sidewalk, the reports said. Smart phone footage posted on Twitter appeared to corroborate some of the allegations of violence.

“Turkey’s leader and his security team are guests in the United States,” said Thomas Burr, the National Press Club president. “They have no right to lay their hands on reporters or protesters or anyone else for that matter, when the people they were apparently roughing up seemed to be merely doing their jobs or exercising the rights they have in this country.

“We have increasingly seen disrespect for basic human rights and press freedom in Turkey,” Burr added. “Erdogan doesn’t get to export such abuse.”

Burr also commended Brookings Institution personnel for resisting efforts by Erdogan’s bodyguards to rough up the press at Thursday’s event.

Independent observers have documented a deterioration of press freedom in Turkey as Erdogan has become more and more authoritarian. Turkey is among the world’s top jailers of journalists. Reporters there have also been increasingly subject to harassment, intimidation and physical attack. ”

Erdogan has become more and more imperial the longer he has been in power, first as prime minister and then as president. He even wants to change the Turkish constitution to the French model, which provides for an extremely powerful president and a weak prime minister. When this plan seemed stymied by the victory of a pro-Kurdish party in last June’s elections, Erdogan went to war with the PKK, a Kurdish terrorist group that had been engaged in peace negotiations, polarizing the public. (The PKK waged a dirty war in the 1970s-1990s and was guilty of massive war crimes, and is still a ruthless and brutal purveyor of terror).

When new elections were held on November 1, his trick was revealed to have worked. Erdogan’s ruling Justice and Development Party got 50% of the vote, up 8 points, and was able to form a government without seeking coalition partners. He would have needed 51% to amend the constitution unilaterally, but still appears to hope he can pick up the support in parliament to tinker with Turkey’s organic law.

A decade ago, I had entertained high hopes in Erdogan, who began as a pragmatist and pluralist despite his own commitments to a center-right Muslim vision. He championed the cause, in militantly secular Turkey, of observant Muslims who were discriminated against by the state. But he also wanted to join the European Union and to move Turkey toward the human rights practices that would allow it. He was vilified by the secular elite and by the more fanatical partisans of Israel, but it seemed to me unfairly so. But in recent years he has become ever more imperious. His party’s crackdown on the Gezi Park protests and intimidation of the press exemplified this move.

Newsweek notes that “Since becoming president in August 2014, Erdogan has filed a record 1,845 court cases against individuals for insulting him, resulting in a more than a dozen sentences, activists have said. Insulting the president carries a maximum of four years in prison in Turkey.”

There are over 50 Turkish journalists in jail, and despite Erdogan’s allegations that they are supporters of terrorism (i.e. of the PKK), many are only guilty of thought crimes.

Some countries, like Turkey, have political libel laws, which are usually pernicious and used to make politics the province of oligarchs.

Although the PKK is guilty of horrific acts of terrorism, Erdogan’s military has sometimes besieged civilian Kurdish villages in the southeast (they are Turkish citizens). When dozens of Turkish academics signed a letter protesting these state tactics, they met with state harassment and some were even arrested (over what was essentially a petition).

Erdogan has also prosecuted journalists for revealing the Turkish role in arming rebels in Syria, some of them likely Salafi jihadis.

His high-handedness is beginning to know no bounds, and now his people are even beating up DC police and manhandling journalists in the US itself. It is shameful.