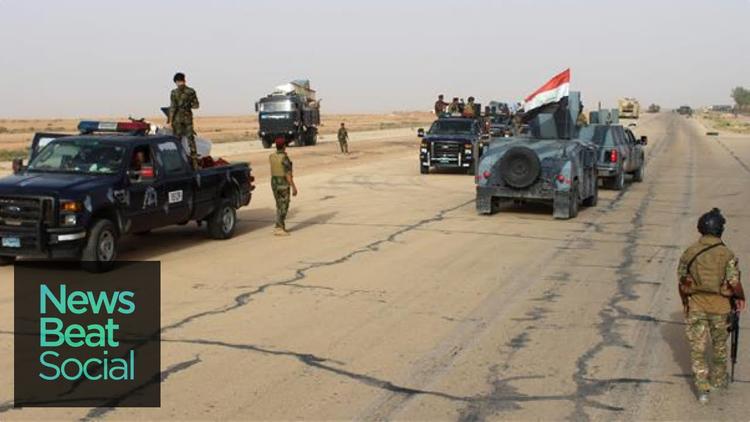 Iraqi forces have taken Rutba in al-Anbar province, hundreds of kilometers west of the provincial capital, Ramadi, which is also now in government hands (though much of its population is displaced). Only a few dozen Daesh (ISIL, ISIS) forces were in Rutba in the end and Iraqi armor and artillery forced them out.

“Al-Anbar police chief, Gen Hadi Rozaij, announced on 17 May that all areas located in Al-Rotba district of Al-Anbar Province, west of Baghdad, were completely recaptured and that the Iraqi flag was raised on its buildings, privately-owned Al-Mada Press news website reported.

He said that tens of Islamic State group (IS, also ISIS/ISIL) were killed and that the forces started to comb the residential areas for any explosive devices left by the extremist group, Al-Mada Press said.”

Jordan has announced that it is now preparing to reopen the border crossing with Iraq. Authorities in the kingdom are especially eager to reopen the land route between Basra and al-Zarqa’, so as to bring petroleum to the refinery in the latter.

One of the sticking points in the negotiations is the Jordan doesn’t want the guards on the Iraqi side to consist of members of the Shiite militias or popular mobilization units. Jordan is a Sunni country (10% of its population is Christian), and its leaders view Shiite Islam with distrust. They consider the Shiite militias to have committed atrocities against Sunni populations, so they don’t want them right on their border. Given the bad security situation in Baghdad these days, with another big loss of life from multiple Daesh bombings on Tuesday, it is not clear that the government can spare the troops for border duty hundreds of kilometers from the Iraqi capital.

The road from Amman, Jordan, to Baghdad has been an economic lifeline for both countries for decades. During the heavy US/UN sanctions of the 1990s, Jordanian truckers and smugglers helped Iraq sidestep the economic boycott. Jordan’s own economy, with few profit centers, benefits from trade with Iraq.

One of the casualties of the rise of Daesh (ISIS, ISIL) in 2014 in western and northern Iraq was precisely this commerce between Jordan and Iraq. Jordan, overwhelmed with Syrian refugees and struggling economically, is desperate to see the road to Baghdad reopened.

Jordan only has a nominal GDP of about $35 billion, so a gain in trade of half a billion or perhaps as much as a billion dollars is quite significant for its prosperity.

The question is whether, given the parliamentary infighting and governmental paralysis in Baghdad, the Iraqi government can keep the road clear of Daesh elements.