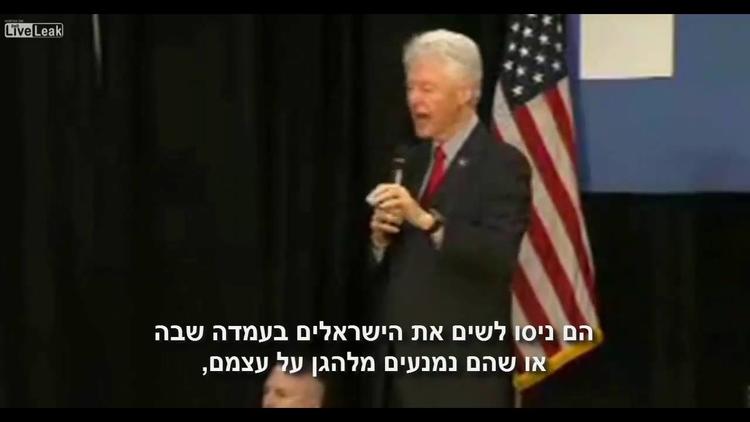 Former President Bill Clinton on Saturday claimed “I killed myself to give the Palestinians a state,” and maintained that he secured an agreement, which the Palestinians turned down. In fact, no such text was ever presented to the Palestinian side, and then Israeli Prime Minister Ehud Barak kept flaking out on commitments previously made, leaving the Palestinian negotiators with nothing to agree to. Negotiator Aaron Miller later admitted, “There was not a formalized, written proposal that covered the four core issues. There was no deal on the table. None of the issues were explained enough in detail to make an agreement, though the Israelis made an interesting argument on Jerusalem.”

No time here to go into the paternalist and colonial language about “giving” the Palestinians a state. They are a stateless people because they are unrecognized; they would get a state by recognizing them as such, not giving them anything.

Here are signs Clinton didn’t put himself out that much:

1. From the time Clinton presided over the handshake between Israeli PM Yitzhak Rabin and Palestinian President Yasser Arafat in 1993 to the end of Clinton’s term, the number of Israeli colonists on the Palestinian land from which Rabin had pledged to withdraw just about doubled. In 1993 there were between 95,000 and 116,000 Israeli squatters in the West Bank and Gaza. By 1996 there were 147,000. By 2000 there were about 200,000. These numbers do not include the squatters in East Jerusalem, which Israel has illegally annexed in contravention of the UN charter. This stab in the back by the Israelis of the Palestine Authority undermined the possibility of a Palestinian state. Did Clinton kill himself stopping this vast expansion of Israeli squatters on Palestinian land? No. Did he do anything at all about it? No.

2. Israel agreed to withdraw its troops from the West Bank by the end of 1998. It did not. Its troops are still there, guarding sometimes murderous or vandalizing Israeli squatters who are trying to displace the Palestinians from their homes. Did Bill Clinton kill himself to get the Israeli troops out of Palestine? No. Did he do anything at all about this collapse of Oslo process commitments on Israel’s part? No.

3. Donald Neff writes that in

“March, 1995 . . . President Clinton invoked the [UN Security Council] veto after all 14 other members approved a U.N. Security Council resolution calling on Israel to rescind a decision to expropriate 130 acres of land in Arab East Jerusalem.23 The Clinton administration exercised two more vetoes in 1997, both of them on resolutions otherwise unanimously supported by the 14 other Security Council members. The draft resolution was critical of Israel’s plans to establish a new settlement at Har Homa ⁄ Jabal Abu Ghneim in East Jerusalem in the midst of Palestinian housing.”

So did Bill Clinton kill himself stopping Israeli large scale theft of Palestinian land while he was supposedly being an honest broker between Israel and the Palestinians? No.

Clinton was the most partisan President for Israel in our country’s history, and was anything but even-handed in his approach to the Palestinians. The Palestinians complained that they’d get an Israeli proposal, reject it, then get the same one from the Americans; there wasn’t really any difference between the positions of those two.

Clinton also defended the brutal Israeli assault on defenseless little Gaza in 2014, blaming it on Hamas and suggesting that they had craftily manipulated world media into blaming the Israelis for killing nearly 2000 Palestinians. Mr. Clinton did not address the issue of proportionality, the key one for critics of the assault. Nor did he address the Occupation, the displacement of Palestinian families to Gaza by the Israelis, or the siege of Gaza, contravening the Geneva Conventions if 1949.

Bill Clinton’s partisanship for the Israeli side and refusal to act as an honest broker, refusal to stop squatter settlements, refusal to let the UN Security Council demand of Israel that it stop contravening international law, and failure to get an actual text to which Palestinian negotiators could assent, all these defects doomed the Oslo process and doomed the world to more turmoil coming out of this interminable conflict. It also encouraged the Israeli side to think they could get away with anything and so warped them into a Likud far-right regime and an Apartheid state.

Bill Clinton didn’t kill himself getting a Palestinian state. His one-sided approach to the negotiations ensured that there would be none. Ever.

Bill Clinton: ‘I killed myself to give the Palestinians a state