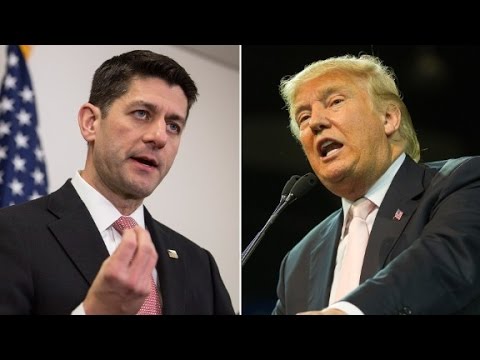 Trump’s appeal is reminiscent of Reagan’s back in 1980 because of their unabashed attack on what they say is a failed political establishment.

With his win last week in Indiana’s Republican primary, it appears increasingly likely that Donald Trump will now be the Republican nominee to run for president. However, Republican party elites are coming around only slowly to that prospect and are still having a hard time accepting that reality. They could still “shoot themselves in the foot,” as the saying goes, by engineering an 11th hour contested nominating convention. Not likely, but still possible.

Or they could accept Trump as the nominee, and withhold their financial support beyond just a token commitment, and instead focus on retaining control of the Senate and US House of Representatives.

The Republican party elite is quite capable of doing that in Trump’s case. A growing number of Republican party leaders are already coming to believe that Hillary is not all that bad an option for them. More Republican billionaires are considering the same. For example, the notorious Koch brothers, ultra-conservative multi-billionaires in the US, have already signaled publicly they could support Hillary if Trump becomes the Republican nominee. And Hillary’s husband, Bill, is reported to be aggressively courting with some success-other billionaire Republicans, seeking money and support for Hillary in exchange for what in return one can only guess.

That the Republican party leaders have still not decided what to do about Trump was reflected in the past week’s verbal exchanges between Trump and Republican U.S. House Speaker Paul Ryan, one of the top leaders of the party. Last month Ryan was clearly being discussed by the “insiders” of the party as the Republican nominee if Trump failed to get the nomination on the first ballot at the convention, and there was a need to select a candidate other than Trump. Ryan was at the top of that list.

Ryan’s initial public statement after Trump’s opponents, John Kasich and Ted Cruz, dropped out of the race this past week was that he, Ryan, could not yet support Trump’s policies or his nomination. Nor would he meet with him. Ryan was clearly speaking on behalf of the rest of the Republican establishment. They were probably testing Trump. Would he come to them and tell them what they wanted to hear, supporting free trade, cutting social security, providing more tax cuts for big business, repeal Obamacare, etc. Refusing to be upstaged by Ryan, however, Trump quickly retorted publicly that he was not ready to support Ryan’s policies either, and was not interested in meeting with Ryan in any event. In short, the Trump-Republican leadership relationship remains fluid, and it is not yet clear what the Republican elite has decided to do with Trump, their presumptive party nominee now that Kasich and Cruz dropped out.

Trump As ‘Outside the Outsiders’

What the Trump-Ryan exchange this past week reflects is that Trump never loses an opportunity to position himself ‘outside’ the two party system, including his own Republican party. U.S. presidential candidates typically like to run as “Washington outsiders” in U.S. presidential elections. Blame all the problems of the country on the “insiders,” i.e. the politicians in Washington. That was Cruz’s strategy, even though he himself was a Washington “insider” as a Senator. But Trump “out-Cruzed” Cruz in the primaries and went one step further, positioning himself as outside the two party system itself, not just the Washington establishment. It’s what voters wanted to hear.

In this year’s election, that’s a theme that has great appeal whether on the left or the right: attack the party system itself as corrupt and non-responsive to average Americans’ interests, not just the Washington establishment. The unresponsive party system has become a kind of proxy for an unresponsive political system itself, which more voters are coming to think is basically corrupt, both politically and economically, undemocratic, and increasingly disregarding of the needs of the majority of U.S. middle and working class households. The parties are only concerned about the interests of bankers, corporations, and the wealthiest 1 percent.

A majority of American voters — on both the left and the right — are increasingly fed up with both political parties. That has become a U.S. voter “hot button” that Trump discovered early in the campaign and has never lost an opportunity to push. Ryan and the rest of the Republican party establishment haven’t quite figured that out yet. They keep playing into Trump and he wastes no opportunity to “push the button” and attack them in return as representatives and reflections of a system that is no longer responsive to average Americans. Sometimes Trump will even bait one of them, charge them with having done great harm to U.S. national security by attacking Iraq when there was no proof of weapons of mass destruction there, as in the case of Trump’s accusation aimed at former president, George W. Bush; or draw out former Republican presidential candidate, John McCain, questioning his former Vietnam prisoner of war status; or some other party “elder” who was previously considered untouchable.

Every time Trump attacked a member of the Republican party establishment — whether Jeb Bush, Cruz, Rubio, or even party leaders not running against him like John McCain, Lindsey Graham, or others — he was de facto attacking the Republican party and its leaders who, with their Democrat counterparts, represent a failed party system in the mind of the U.S. voter. The Republican party elites could not — and still do not — understand why Trump is doing this. But Trump and the voters understood. And every time they criticized Trump in return for his attacks, he comes back at them declaring them part of a corrupt party system. Their criticisms don’t weaken Trump; they strengthen his appeal. And the more abusive of them Trump becomes, the more it resonates with U.S. voters.

Echoes of a Past Election

There are a number of “echoes” of past U.S. elections in this year’s U.S. election. In a number of important respects, Trump’s appeal is reminiscent of Reagan’s back in 1980. Not because their policies are similar. But because of their unabashed attack on what they proclaim is a failed political establishment.

That appeal should not be underestimated by progressives or liberals. Trump cannot be simply disregarded as “crazy” or some kind of fascist, the latter charge only revealing how little they understand fascism let alone Trump. It is true that Trump is more brash, crude, and outlandish in his public statements and his pandering to the ignorant ultra-conservative base in the US, when compared to Reagan. All that different in tone reflects, however, is the general deterioration of U.S. public and political discourse in recent decades. Progressives and liberals today, who were not around in 1980 to experience the 1980 election, should know that Reagan in 1980 was no less “shocking” for the time with some of his extreme positions and proposals.

One of the several things that are unique in this 2016 electoral cycle is that a majority, if not a big plurality, of American voters are becoming increasingly fed up with the two party system — which is perhaps better described as two wings of a single Corporate Party of America system. Both wings, Republican and Democrat, have been flapping in unison the past 36 years, both delivering neoliberal economic policies that have been devastating average Americans’ standard of living, while enriching the wealthiest 1% households and their corporations to an obscene degree.

As a recent study by University of California, Berkeley professor, Emmanual Saez, has revealed using IRS data: no less than 97% of all the net gains in national income since 2008 have been captured by the wealthiest 1 percent households. That compares to 65 percent captured by the same during 2000-2008, and 48 percent captured in 1992-1999.

It may be the two party (two wings-single party) system is today the target of U.S. voter wrath in this particular election. But it may also be that the party system itself is a proxy for a growing, deeper discontent with the system itself that could eventually manifest more quickly than some think. It is not coincidental that in polls nearly half of young workers in the U.S. today speak sympathetically about, or identify in some way, with Socialism. They may not have a clear or historical understanding of the term, but to them it means “anything but the present” in some fundamental way.