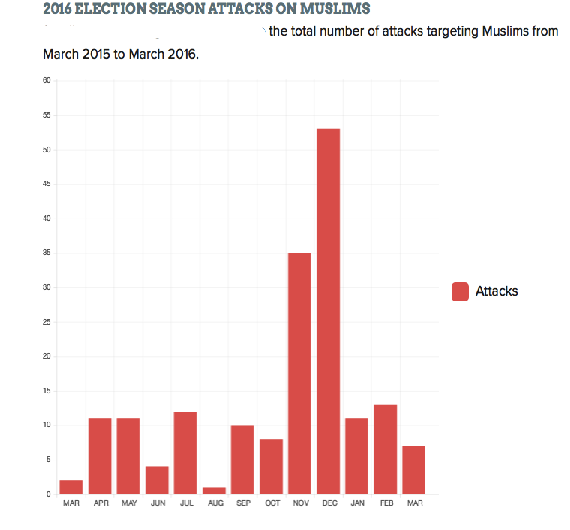 This report highlights trends and patterns surrounding Islamophobia since the start of the 2016 U.S. presidential election cycle. It does so in the broader context of hatred, violence and social hostilities confronting Muslims as a minority faith group in contemporary America and with a particular focus on acts and threats of violence.

Since 2015, the Bridge Initiative has been chronicling Islamophobic political rhetoric by each presidential candidate irrespective of his or her party affiliation while finding Republican candidates to be the worst offenders to date. In this publication, however, we aim to contextualize such statements nationally and internationally while also exploring potentially violent effects.

Based upon our analysis, the following observations are noteworthy:

During the course of 2015, there were approximately 174 reported incidents of anti-Muslim violence and vandalism, including: 12 murders; 29 physical assaults; 50 threats against persons or institutions; 54 acts of vandalism or destruction of property; 8 arsons; and 9 shootings or bombings, among other incidents.

Anti-Muslim violence remained significantly higher in 2015 than pre- 9/11 levels with American Muslims approximately 6 to 9 times more likely to suffer such attacks. The number of incidents in 2015 is also higher than the total number of anti-Muslim hate crimes reported in 2014: 154.

Since the first candidate announced his bid for the White House in March 2015, there have been approximately 180 reported incidents of anti-Muslim violence, including: 12 murders; 34 physical assaults; 49 verbal assaults or threats against persons and institutions; 56 acts of vandalisms or destruction of property; 9 arsons; and 8 shootings or bombings, among other incidents.

Since the start of the presidential election cycle, American Muslim men have been twice as likely to be victims of physical assaults and about 11 times more likely to be the victims of murder than their female counterparts.

Also during each period, Muslim murder victims were most likely to be aged 18 to 24.

Children and youth – as young as 12 years old – were among those responsible for acts and threats of anti-Muslim violence.

Although Islamophobia made an appearance during the first GOP debate in August 2015, the first surge of anti-Muslim political rhetoric occurred in September 2015.

It corresponded with an international development: the Syrian refugee crisis. The deepening crises dominated news media headlines in the U.S. and Europe potentially highlighting the media impact on political discourse.

This surge in September 2015 was accompanied by approximately 10 reported incidents or threats of violence, including 3 murders. In comparison, there was one (1) such incident in August 2015 representing a significant increase in anti-Muslim violence over the course of one month.

Donald Trump, the GOP presidential front-runner at the time of publication, escalated anti-Muslim vitriol in the wake of the terrorist attacks in Paris, France in November 2015 rather than urge calm or international unity. The attacks signify an international event that triggered a second surge in Islamophobic rhetoric in addition to the uptick in bias attacks.

Trump made many anti-Muslim statements during televised appearances on mainstream news media outlets, impacting millions of viewers across the U.S. and around the world.

As Mr. Trump called for shutting down mosques in the wake of the Paris terrorist attacks and the mass shootings in San Bernardino, California in December 2015, anti-Muslim attacks initially tripled with nearly half of those attacks directed against mosques.

At least three separate incidents of violence involved perpetrators who were public supporters of presidential candidate Donald Trump. There was otherwise a strong perception among American Muslim leaders that political rhetoric created fertile ground for threats and acts of anti-Muslim violence.

While anti-Muslim political rhetoric gives cause for alarm, the ensuing violence has inspired expressions of solidarity with the American Muslim community, too.

Via Bridge Initiative at Georgetown University