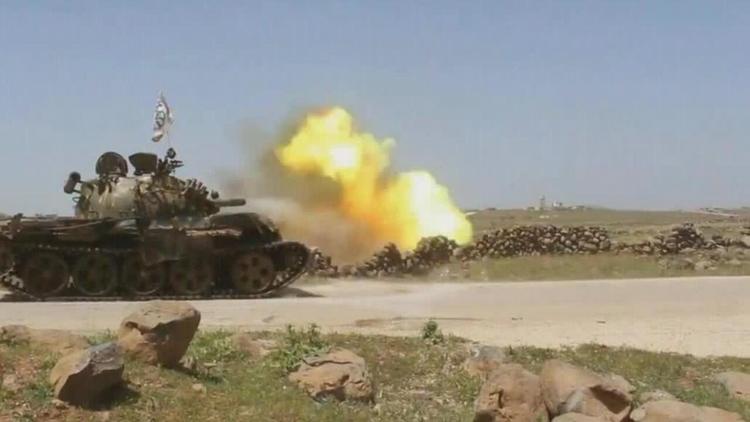 The Yarmouk Valley is run by ISIS – and left alone by Israel. This is a testament to the complex, cynical and calculated machinations of the actors in this conflict.

There is a strange relationship between Israel and a small sect of the Islamic State of Iraq and Syria (ISIS) based next to the Golan Heights. The very presence of a group like ISIS so close to Israel poses many questions.

Firstly why has ISIS not attacked Israel – a country they have sworn to destroy – from said base? Similarly why has the Israeli Defence Force (IDF) not attacked this small and weak group of extremists on their border? The answers to such questions show the truth behind the rhetoric all actors use in this conflict.

The Yarmouk valley is wedged between Jordan, Syria and the Israeli-occupied territories of the Golan Heights. The valley consists of a few small towns, the majority of which are now controlled by the ISIS affiliated Liwa Shuhada al-Yarmouk or the Yarmouk Martyrs Brigade (YMB). This group was established by Mohammad al-Baridi, known by his nickname ‘The Uncle’ in 2012 in southwest Syria. The group started off relatively moderate, with a close alliance to the Free Syrian Army. But the moderation quickly dissipated during the course of the Syrian civil war.

The start of 2013 saw the YMB gain power in the Yarmouk Valley. The YMB in 2013 started to have military clashes with Jabhat al-Nusra, the Syrian al-Qaeda group who held the power in the Daraa governorate (the southwest governorate of Syria). This led to the assassination of al-Baridi by al-Nusra in November 2015. During this time, the group carved out a small area for themselves on the fringe of the Daraa governorate next to the Golan Heights. YMB continued to distance themselves from al-Nusra, while still promoting conservative Islamic laws.

The YMB in 2015 began implementing Islamist reforms through the islah policy. The policy was implemented under al-Baridi and sought to ‘correct’ the policies of the previous regime. This included the creation of an Islamic court and police force. YMB also changed the name of its department of governance to Diwan al-Hisba, Diwan translating to the regional name for ISIS. The group even changed their logo to incorporate the ISIS flag. By the end of 2015 YMB became a sub-group of ISIS, only a stone’s throw away from Israel.

The YMB alliance means that ISIS now shares a border with Israel, yet they have not acted on this. In one of al-Baghdadi’s speeches he discussed Israel, however he only referred to the area as ‘Palestine’, probably in an effort to avoid indirectly acknowledging statehood through using the term ‘Israel’. Al-Baghdadi reminded the Jews in ‘Palestine’ that ISIS “has not forgotten you.” Such messages from al-Baghdadi are very rare; this one was presumably made due to internal pressure in ISIS to reaffirm its anti-Israel stance. He then went on to say that “with the help of Allah, we [ISIS] are getting closer to you [Israel] every day.” This is puzzling, for ISIS has an armed group of fighters next door to Israel, to get any closer would mean they would be literally inside the country. So why has ISIS not followed through on their threats and invaded?

ISIS are significantly more likely to attack the weak then the strong. While there are some reports that the YMB have an armoured division looted from campaigns in Daraa they still predominantly use small arms and homemade explosives. ISIS is currently being pressed on all fronts; if they have to choose between attacking Israel and attacking a largely civilian area in the already decimated Deir ez-Zur province, historically they have picked the latter. Yet that does not explain Israel’s reaction to ISIS’ possession of such a threatening territory.

The YMB have already provoked international outrage. In 2013 the YMB kidnapped some 20 Filipino United Nation peacekeepers. They held them for two weeks before releasing them. However YMB kidnapped these peacekeepers from inside Israeli occupied territories. While YMB was only loosely affiliated with ISIS in 2013 there have been no repercussions for an Islamic militant group infiltrating an Israeli buffer-zone and kidnapping UN peacekeepers. Israel has shown in the past it is willing to attack groups on its borders that it perceives as a threat.

Israel has during the Syria civil war authorised airstrikes in Syria multiple times. These airstrikes however have aimed not at ISIS, nor al-Nusra or other Sunni jihadist groups. These strikes have overwhelmingly been targeted at the assets of Shia-affiliated groups, predominantly Hezbollah.

Israel in September 2014 also shot down a Syrian Air Force fighter jet for straying into Golan airspace: the first time since the 1973 Arab–Israeli war that the IDF has attacked Syria’s official military. Israel has shown during the Syrian civil war that it is willing to attack those who threaten its territorial integrity – but not ISIS.

The YMB has entered Israeli-held territory, yet there has been no reported conflict between the two groups. In fact there have been reports by Foreign Policy Magazine claiming that far from fighting the militias on the Golan boarder, Israel has been providing health care to the militants. Around 1,000 Syrians within fourteen months have been given treatment, according to Lt. Col. Peter Lerner. The Lt. Col. went on to say, “we don’t do any vetting or check where they are from or which group they are fighting for, or whether they are civilians.”

There seems to be very different treatment for rebel groups on the south of the Golan Heights border than for those in the north. But why would Israel, which authorised multiple bombings on Syrian militant groups, take such a relaxed view towards ISIS on their doorstep?

Israel is focused not on ISIS and Sunni groups, but on the Shia groups in Syria. Israel’s airstrikes have hit Assad’s Shia-backed regime and Hezbollah, not ISIS or al-Nusra. Correspondence between the then-Secretary of State Hillary Clinton and political advisor Jacob Sullivan about Israel’s aims in the region tried to rationalise why Israel ignores ISIS.

In 2012 at the start of the conflict, Sullivan said that there was “a positive side to the civil war in Syria.” This so-called ‘positive side’ to a war that has cost some 400,000 lives was that, “if the Assad regime topples, Iran would lose its only ally in the Middle East and would be isolated.” This would please Israel, which under the Netanyahu government has fixated on the perceived Iranian threat. A war which destabilizes Iran’s ally, Assad, would benefit Israeli interests. This Machiavellian belief could explain why ISIS is not focused on. The Iranian backed Shia militias are the biggest concern for Israel, not extremist groups such as ISIS.

A senior Israel military advisor when asked about Israeli policy in the Syrian civil war apparently quoted Sun Tzu, saying “he will win who knows when to fight and when not to fight.” This is a sentiment that is followed by ISIS and Israel alike. ISIS knows it is too weak to fight Israel and Israel is concerned with enemies it thinks are worse. The Yarmouk Valley is on one of the most contested borders in the world, controlled by one of the most aggressive and disliked military forces, and is next to a country notorious for being extremely conscientious about its border security, all taking place in a warzone where violence is expected.

Despite all this, the Yarmouk Valley is still run by ISIS, left alone by Israel and is a testament to the complex, cynical and calculated machinations of the actors in this conflict.

From last year: “2015-04-28 Islamic Front in combat with ISIS on the Golan-Heights near the border of Israel”