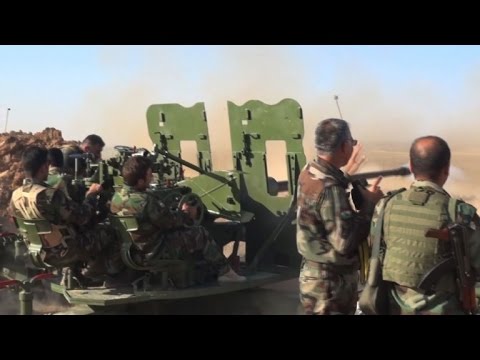 On Memorial Day, it is as well to remember that US troops are still at war. Afghanistan is our nation’s longest such military engagement.

But although there are only about 3,000 troops in Iraq and just a couple hundred in Syria, they are at the front lines in confronting the most dangerous terrorist groups.

After having caught sight of US special operations forces fighting alongside the leftist Kurdish YPG militia in Syria near the Daesh (ISIS, ISIL) HQ of al-Raqqa, Agence France Presse got another coup on Saturday by discovering similar US forces embedded with Kurdish Peshmerga fighters of the Kurdistan Regional Authority in their assault on Daesh position at Khazir to the east of Mosul. The Peshmerga are attempting to liberate from Daesh control several villages near Khazir, which were historically populated by Kurds but had been taken over by the terrorist organization in 2014. AFP reporters were instructed to delete any photographs they took of the US troops.

A former US military officer has said that US troops are actively engaged in fighting at both major remaining fronts against Daesh, al-Raqqa an Mosul. Some 5,000 Peshmerga are involved in the taking of Khazir, which the Pentagon described as one of several “shaping operations” being engaged in in the Mosul area to soften up Daesh in preparation for the ultimate assault on that city.

The line of the Obama administration had been that US troops on the ground in Iraq and Syria were only trainers and advisors. But in a Sky News interview yesterday, former assistant secretary of state and former brigadier general Mark Kimmitt admitted that here and there the US forces had exceeded that role. He also admitted that it had become difficult for the US to keep it secret. He said it had been found ineffective for US advisers to proffer their counsel from 50 miles away, and that it had been determined that it was better for them to advise while on the battlefield at the front.