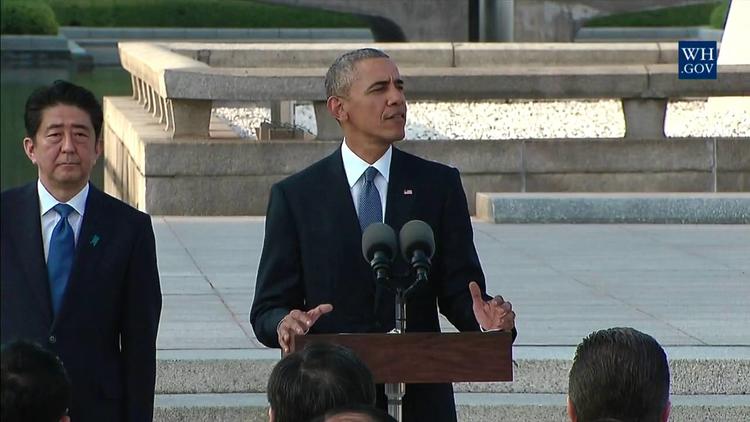 ” But among those nations like my own that hold nuclear stockpiles, we must have the courage to escape the logic of fear and pursue a world without them. We may not realize this goal in my lifetime, but persistent effort can roll back the possibility of catastrophe. We can chart a course that leads to the destruction of these stockpiles. We can stop the spread to new nations and secure deadly material from fanatics.”

Although it is true that Obama has been the least successful president in some time in reducing nuclear stockpiles, there is one area where he has had success in reducing world tensions, and that is with regard to Iran. Moreover, the Iran breakthrough has implications for both nonproliferation and for conventional warfare. A war on Iran was one of the central objectives of the Cheney/ Neoconservative faction in the George W. Bush White House, and had their war of aggression on Iraq not gone sour, the would have likely gone on to Tehran.

The standing War Party in Washington has figured out how to pursue conventional wars of aggression in the face of public skittishness: They simply hype a country they want to plunder as an unconventional threat– i.e. as a country that could have nuclear weapons or even chemical and biological weapons.

It was pure propaganda that Bush’s “brain,” Karl Rove, melded these together as “weapons of mass destruction,” so that they could equate some old canisters of mustard gas to an atomic bomb. Unfortunately for the Bush warmongers, the Baath regime in Iraq had actually destroyed its chemical stockpiles, so they were left empty-handed when it became clear that Iraq had no nuclear weapons program at all.

That is, nuclear proliferation is only one danger. The other is that even the appearance of such proliferation has been turned by the unscrupulous into a casus belli where the “wrong” regime undertakes it. The chain of events unleashed by Bush’s Iraq War killed many more people than did the atomic bombs dropped on Hiroshima and Nagasaki.

“We must change our mindset about war itself to prevent conflict through diplomacy and strive to end conflicts after they’ve begun. To see our growing interdependence as a cause for peaceful cooperation and not violent competition. To define our nations not by our capacity to destroy, but by what we build. And perhaps above all, we must reimagine our connection to one another as members of one human race.”

Obama’s major breakthrough was to convince Iran, which has never given any evidence of wanting a nuclear weapon (as opposed to the ability to enrich uranium for fuel and to use that ability as a deterrent to foreign aggression) to take steps to reassure the US and the world about its intentions. Most urgently, that required Iran to mothball the heavy water reactor it planned at Arak (the Iranians have concreted in its core), to reduce the number of active centrifuges they are running for enrichment, and to reduce their stockpile of low-enriched uranium of the 19.25% enriched variety (ostensibly produced for their medical reactor, which makes isotopes for treating cancer). Iran has done all of these things as required and in a timely way, and is subject to the sort of regular inspections that make effectively deter cheating (the signatures of highly enriched materials are easily detected and linger for months, and can’t be cleaned up).

Critics of Obama can point to other instances where he was not as successful as in Iran, can point to his long war and failed troop escalation in Afghanistan, his backing for the Saudi attack on Yemen, his fascination with drone-assassination, and the many covert actions he pursues. Even Bill Clinton was less of a war president than Obama. But surely it is possible to praise his instance of successful peace-making even when he hasn’t been universally a peace-maker. Historians will see Obama’s Iran diplomacy as one of the greatest achievements of his presidency, and perhaps as a turning point in anti-proliferation through diplomacy.

Future leaders should take a lesson from Obama; when there is a war you don’t want fought, then resolve the outstanding issue and spike the warmongering. The Military-Industrial Complex is so powerful in both parties that sooner or later they will get a candidate into the White House and a pliable Congress, and they they will want to turn some ramshackle third world piggy bank upside down and shake out its billions into their accounts. The MIC made trillions off the Iraq War.

So anti-proliferation diplomacy is necessary both to deter further stockpiles of nuclear weaponry *and* to remove a pretext for war-making from the War Party in Washington.

With regard to Iran, Obama has probably succeeded in forestalling a US attack on that country, though both Hillary Clinton and Donald Trump have taken an aggressive posture toward it. And, both will be lobbied by the Netanyahu regime in Israel and by Saudi Arabia to heighten tensions with Tehran.

As we consider the poignant moment when the president of the United States hugged a Hiroshima survivor, and as we mourn our war dead (on a day that was founded as an anti-war commemoration) — including 4,425 killed in Iraq for no good reason– we have reason to treasure the achievements of determined diplomacy in resolving the Iran nuclear issue without more bloodshed and terror from the skies.