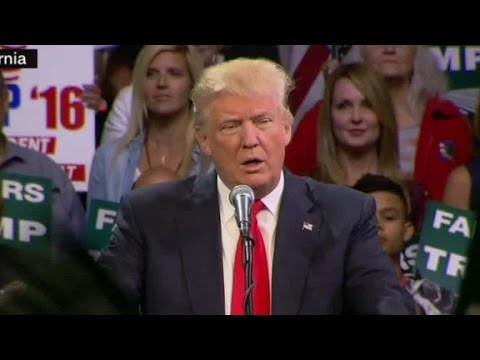 The presumptive GOP nominee told supporters in Fresno, California on Friday that he does not believe the state is currently facing drought-like conditions.

During an electoral campaign speech on Friday, Republican presumptive presidential candidate Donald Trump told California voters that he can solve the state’s water crisis by simply declaring “there is no drought.”

Trump accused state officials of diverting precious crop water “to protect a three-inch fish,” at the behest of environmentalists.

Trump appeared to be referring to longstanding federal laws designed to protect endangered fish by ensuring the species have enough water. The rules dictate how much water from the Sacramento River must run into the ocean.

“If I win, believe me, we’re going to start opening up the water so that you can have your farmers survive,” Trump said.

Trump said he spent 30 minutes before the rally meeting with more than 50 farmers who complained to him about their struggles.

Trump has said in the past he believes global warming is a concept that was invented by China to hurt the competitiveness of U.S. business.