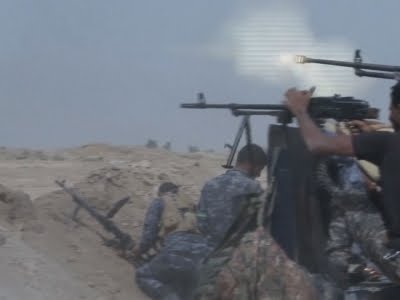 BBC Monitoring surveyed the Arabic press on 27 May for the issue of the Iranian role in the Iraq government campaign to take Fallujah from Daesh (ISIS, ISIL). Although Saudi and other newspapers say they want to see Daesh defeated, they are deeply critical of the Shiite militias or Popular Mobilization Forces, alleging that they use indiscriminate fire and create high numbers of civilian casualties when operating in Sunni Arab areas.

Fallujah is a storied Iraqi Sunni stronghold of several hundreds of thousands of residents, the “city of minarets.” It fell to Daesh in January of 2014, and I think it is fair to say that there is much more angst in the Sunni Arab world about its liberation at the hands of Iran-backed Shiites than there has been about Daesh’s brutal occupation of the city.

“In Bahraini pro-government Akhbar al-Khalij, Hamed Ezzat al-Sayyad balmes Tehran for attacks on Sunnis in Fallujah. He describes Iran as “the modern Mongols”, and “a cancerous entity that should be faced through an Arab liberation project”. He cites “the brutal assault on Fallujah which is a stronghold for Sunnis in Iraq”.

It also reports that the pro-government Saudi newspaper al-Riyadh alleged that the Shiite militias had randomly attacked a civilian hospital, and complained that 300 Iraqis had already been killed in the run-up to the main battled.

Jordan’s al-Ghad (private) ran a column by Isa al-Shu`aybi alleging indiscriminate killing “based on sectarian segregation” by the Shiite militias.

Abdullah al-Awady of the UAE’s al-Ittihad (Unity) attacked the Shiite militias for “exterminating” Sunnis and alleged that the Iraqi government was firing Sunnis from all state institutions.

In a May 23 report, BBC Monitoring had quoted some tweets by Sunnis actually rooting for Daesh if that meant that the Shiites would be defeated:

Iraqi activist named in Arabic “Shammariyat al-Iraq” (@moonnor27, 160K followers), whose tweets show her support for jihadism in Iraq, tweeted: “A call to every Muslim to tweet by using the hashtag ‘Support_Fallujah_with_prayer’. The Shia PMF are fiercely shelling [the city]. Genocide of Sunni families is being carried out. Pray for the oppressed, O Muslims.”

Needless to say, the Shiite militias for all their faults are not actually interested in “exterminating” Sunnis– in fact there are photos showing Iraqi Sunnis around Fallujah greeting them as saviors. But in some instances, as at Tikrit, they have allegedly committed reprisal attacks against Sunnis they held responsible for massacring Shiites or actively collaborating with Daesh.

On the other side of the aisle, BBC Monitoring surveyed the Iranian press on this issue on May 24:

Keyhan predicted that the high morale of the Iraqi armed forces, in particular the Popular Mobilization Forces or Shiite militias, a quick victory at Fallujah is possible. It claims that Daesh has moved chemical weapons to residential districts of Mosul, to deter the inevitable assault on their last major stronghold in Iraq, after Fallujah falls. [Mosul metropolitan area probably had 2 million inhabitants before Daesh took it over; it is now probably half that or less].

Khorasan predicted that the liberation of Fallujah will strengthen Iraqi national unity and put more power in the hands of the central government. It also paves the way to an assault on Mosul. It urges the government to resettle people in the city and integrate it into Iraq’s democratic system.

Javan argued that Daesh in Fallujah posed a security problem for Baghdad and for nearby Shiite cities such as Karabala. It also presented a baroque conspiracy theory in which the US is actually behind Daesh and other Sunni extremist groups even while it is orchestrating their demise.