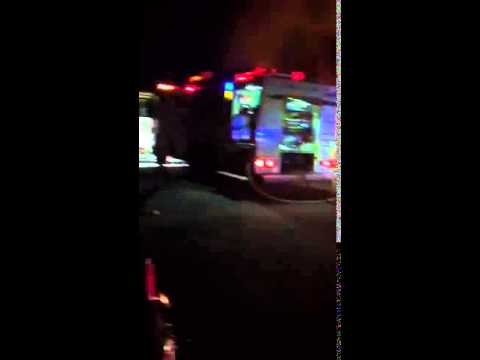 The workers set at least seven buses on fire to protest Binladen construction group firing of at least 70,000 laborers after six months of no pay.

Foreign workers at one of Saudi Arabia’s largest construction companies, Binladin group, set fire to at least seven buses in protest of being fired from their work after not being paid for more than six months, local media reported Sunday.

The incident took place in front of the Binladen’s offices in the city of Mecca, according to a report by the local Okaz newspaper.

The report said the workers were protesting at the offices and then set seven companies transport buses on fire. The fire was contained and no injuries were reported. The incident was captured in a video available on YouTube.

The news came after the Binladen group laid off more than 70,000 workers, cancelled their work visas and told them they need to leave the country immediately. Media reports also said that the company plans to fire Saudi citizens in supervisory, administrative, engineering and management jobs.

The laid off workers have said they had not received any salaries for over six months. The company has been feeling the impact of the country’s economic crisis in the country amid low oil prices. In March, unpaid workers also protested in front of the company’s offices in the capital Riyadh.

Foreign workers make up to 30 percent of Saudi Arabia’s population, according to government estimates. More than 2.5 million of those foreign workers are from India and Pakistan, who tend occupy low paying jobs in construction and cleaning services.