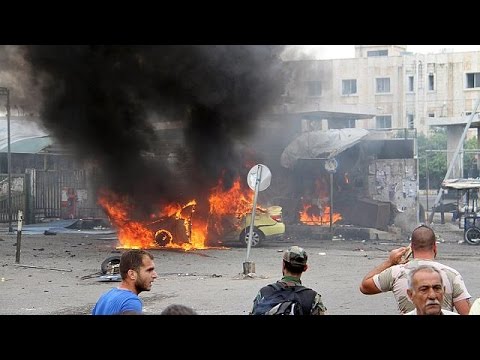 The leftist Beirut daily al-Safir reports that security in Syria broke down dramatically on Monday, as seven bombs timed to go off simultaneously hit soft targets in the Syrian Mediterranean cities of Jebleh and Tartus, killing some 150 persons and wounding 225
, the vast majority of them innocent noncombatants. Daesh (ISIS, ISIL), took responsibility for the carnage. The cities that were struck are vital transportation hubs.

Al-Safir says that the bombs were timed to hit commuters and students going to their exams. The Daesh claim of responsibility explicitly mentioned that the victims were hit because they were `Alawite Shiites. (Daesh, a hard line Salafi group, poses as a champion of Sunni Muslims).

The attacks were carried out, it said, by ten suicide bombers, two of them driving car bombs. They split into two teams of five each to target the two cities.

It is worth mentioning that Russia has naval docking rights at Tartus, and used an airport near the city to bring in the heavy military equipment it used to attack al-Qaeda, Daesh and other groups. It is thus a highly symbolic target.

It is near to the port of Latakia, the lifeline of the capital of Damascus.

Jebleh is in Latakia Province, a regime stronghold.

Some had attributed the attacks to the Freemen of Syria (Ahrar al-Sham), which on its twitter feed expressed satisfaction at the killing of Shiites. And, there were questions about the Daesh claim of responsibility, since it used a vocabulary different from its usual one.

Al-Safir says that the attacks were likely intended by Daesh to send the message that despite its losses in other provinces (it was expelled from Palmyra, e.g.), it is still relevant. Tartus, the capital of the province of the same name, and Jebleh in Latakia are Alawite Shiite population centers that oppose Daesh and other Sunni fundamentalists and are bedrocks of the regime of Bashar al-Assad. On the other hand, al-Safir points out that Tartus has doubled in size because of an influx of Sunni refugees, so that the numbers of Sunnis and Shiites in the city may just about be even. That is, many of the victims were likely displaced Sunnis.

That point brings up another theory, evident on social media from Tartus, in which locals speculated that the refugee population contained covert Daesh cells who carried out the attacks.

The hard line Salafi fundamentalists, including al-Qaeda, took neighboring Idlib province to the east and seemed poised to conquer Latakia and expel its Alawites when, in fall of 2015, Russia intervened and pushed the Salafis out of Latakia.

The proximity of al-Qaeda and the Freemen of Syria to these cities on the face of it makes it more likely that they are behind the bombings, though the tactics used are those of Daesh. Daesh’s population center is very distant, in eastern al-Raqqa Province.

The attacks put the lie to rumors that Tartus was relatively safe because of a secret international agreement.

In Jebleh the bombs went off at 9 am, 2 at a civil transportation garage and a third at the municipal electricity offices. A fourth was set off a the entrance of a hospital emergency room, killing and wounding medical personnel.

In Tartus, the gate of the city was closed for a while. The hospitals are calling for blood donations.

About a year ago, an attempt to set off a car bomb in Tartus was foiled.