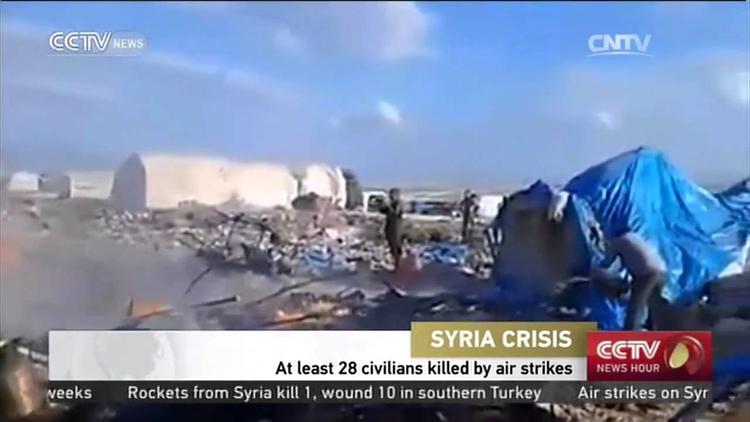 Twelve days ago Fatema Qaitani, a 35-year-old mother of four, was sitting in a tent teaching her daughter how to read when her life was changed forever. Fatema’s tent, one of many that sprang up in a camp for displaced Syrians on the outskirts of Idlib, had been her family’s home for two months. The camp sheltered 4,500 fellow Syrians who fled their homes but could not flee their country, after Syria’s border with Turkey was slammed shut.
People stand near the damage after air strikes on May 5 hit a camp for internally displaced people in Syria’s Idlib province near the Turkish border, May 7, 2016.
Expand

People stand near the damage after air strikes on May 5 hit a camp for internally displaced people in Syria’s Idlib province near the Turkish border, May 7, 2016.
© 2016 Reuters

As Fatema and her daughter poured over a verse from the Quran together, an airstrike hit the camp causing an explosion near their tent. Fatema was injured in the head, chest, and stomach.

It was hard to reach Fatema. For two days, I searched for the camp’s wounded via our network of activists and doctors. Finally, I got hold of Fatema on the phone as she lay on her hospital bed in a hospital in Antakya, inside Turkey. She spoke clearly and strongly about her ordeal, but the shock in her voice was palpable.

“All of a sudden there was dust and rocks flying all over the place and I saw my children fly in the air from the impact of the explosion,” Fatema told me. “I was able to pick myself up and when I looked around I saw my son without a head and my daughter was also torn up with no limbs. The other two were bloody and looked dead so I left them where they were. I was shocked and I started to scream and scream and then lost consciousness. The next time I woke up, I found myself in the hospital.”

Idlib is a long way from Vienna, where some big players are meeting this week to figure out what to do about Syria. The International Syria Support Group, including the United States and Russia, are trying to revive a ceasefire that crumbled last month, but had at least briefly afforded the first semblance of peace for parts of Syria after five long years of conflict.

People like Fatema and her children need to be at the center of efforts to stem the atrocities in Syria. And the protection of civilians, still targeted in government airstrikes or by shelling from opposition armed groups, should be everyone’s priority.