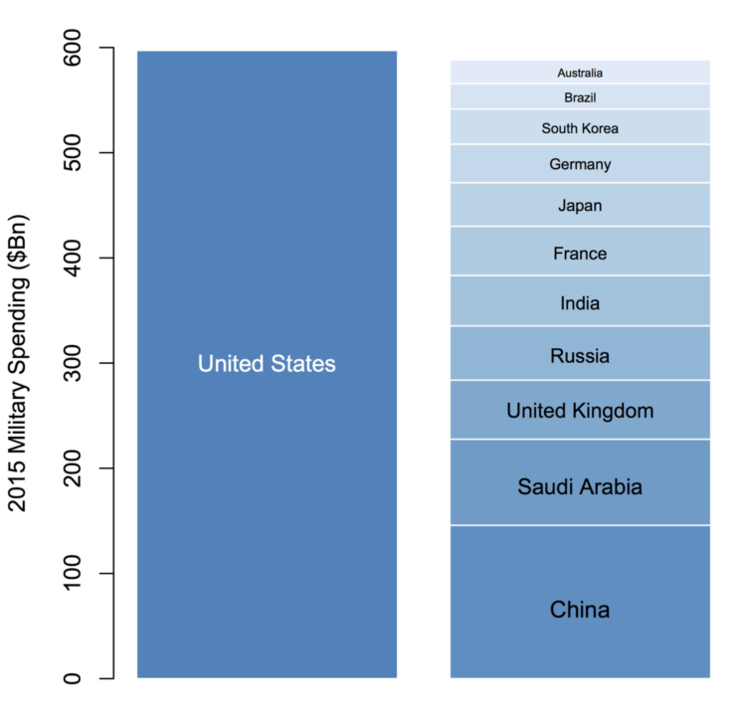 One of the prominent themes in this year’s presidential primaries is the state of the American military.

In his April 27 foreign policy speech, Republican front-runner Donald Trump summed up the majority view of the GOP:

[W]e have to rebuild our military and our economy. The Russians and Chinese have rapidly expanded their military capability, but look at what’s happened to us. … Our military dominance must be unquestioned, and I mean unquestioned, by anybody and everybody.

Democratic candidate Hillary Clinton, by contrast, sees little need to rebuild. She pledges to “ensure the United States maintains the best-trained, best-equipped and strongest military the world has ever known.”

Bernie Sanders argues that the military should be reduced: Sanders expresses frank concern over the size of the American military budget, which in 2015 was “greater than the spending of the next seven largest defense budgets combined.”

Hearing these contradictory statements may confuse voters. Is our military overfunded or falling behind?

To answer this question, it helps to examine three perspectives on military capabilities: readiness, relative strength and efficacy.

How ready are we?

The military itself, as well as many think-tank scholars, tends to focus on one or more of four major dimensions of military capacity.

One is force structure, or the raw numbers of tanks, ships, divisions and so on that make up our armed forces. The second is modernization, or the level of technical sophistication. The third is sustainability, or the ability to maintain operations once underway. The last is combat readiness.

Such measures gauge the current military capability of the United States relative to what our own military says it needs in order to be fully operational. Based on these criteria, the conservative Heritage Foundation ranks America’s overall military capability as “marginal, [as] a consequence of the cumulative effect of many years of simultaneous underinvestment and extensive operations.”

Readiness measures like this one can help the military and Congress set budget priorities. But they don’t tell us anything about whether we are falling behind other countries.

What is our relative strength?

When academics who study international relations measure military strength, we focus on metrics that directly compare the military capabilities of one country to those of another.

The most venerable index is the Correlates of War project’s Composite Index of National Capability (CINC). The index measures the average of a country’s share of systemwide resources across six dimensions: total population, urban population, iron and steel production, energy consumption, military personnel and military expenditures.

Other measures that do not suffer from these shortcomings have been proposed, each with a somewhat different approach.

In “The War Ledger,” Professors A.F.K. Organski and Jacek Kugler argue that a major power’s capacity to win an all-out conventional military conflict in which both sides can fully mobilize their resources depends both on the wealth that it can bring to bear in producing sophisticated military hardware and on the size of the population that it can call upon to fight.

Professors Organski and Kugler measure wealth as GDP per capita, or gross domestic product divided by population. Their formula poetically captures the idea that both elements are necessary, but only work together. Of course, when you divide by population and then multiply by the same number, you end up with GDP.

Our GDP is 168 percent of that of China, our nearest competitor. Under Organski and Kugler’s measure, the U.S. handily wins on relative strength.

Military budgets are another way to answer the question. Budgets can be used as a rough measure of one country’s capacity to defeat another using existing forces – rather than the forces that could be brought to bear in a more sustained national effort. Direct comparisons can be challenging because technological sophistication brings disproportionate returns on the battlefield. Professor Phil Arena has recently proposed a new measure: M – total military personnel, weighted by spending per soldier – to make military-to-military comparisons more meaningful. The military spending of the United States in 2015 exceeded that of the next 11 countries combined, seven of which are our allies.
(Data source: World Military Balance 2016, International Institute for Strategic Studies.)


Our M score is on average about 150 percent of that of each of the next six countries on the list, all of whom are our allies. Our military spending, despite the self-inflicted wound of the 2013 budget sequestration, is still four times that of our nearest competitor and 38 percent of all military spending worldwide.

It turns out that Senator Sanders’ assessment was actually somewhat conservative. America’s military expenditures are greater than the next 11 largest defense budgets combined. Seven of those 11 countries are our allies.

Can we get the job done?

A final measure of the state of America’s military is its ability to achieve foreign policy objectives.

Traditionally, military forces are used to achieve military victories, which in turn lay the groundwork for a political settlement.

America’s military is exceptionally good at doing this. Baghdad fell to coalition forces in 2003 after only 21 days of fighting. The multilateral intervention in Libya to prevent genocide in the city of Benghazi was heralded by The New York Times as “a model for how the United States wields force in other countries where its interests are threatened.”

In recent years, however, armed forces have increasingly been tasked with the imposition and maintenance of political solutions after victory. This could include, for example, nation-building or the elimination of terrorism. Here, traditional metrics of military power count for little.

As Andreas Wimmer argues in new research on nation-building, political success hinges on slow-moving, generational processes like the growth of civil society and the establishment of political legitimacy. These processes are far more difficult to influence over the course of months or years than purely military outcomes – and far more difficult to influence via military means.

Similarly, the terrorist organizations that are increasingly our enemies typically avoid the battlefield. When they do attempt to take and hold territory, as ISIS has done in northern Iraq and Syria, military force can be brought to bear with considerable effect. To date, ISIS has lost about 40 percent of the territory that it once held in Iraq. But the military can do little to prevent attacks like the recent ones in Paris and Brussels. The inability of the military to engage in nation-building and prevent terrorist attacks can create the impression that we are losing the war. What we are actually losing is the peace that follows.

Candidates tend to focus on whichever metric best suits their preferred policy. By looking at the military from all three perspectives at once, though, we can get a more nuanced view of American military capabilities.

Thanks largely to the effects of waging simultaneous wars for over a decade, the American military is not at peak readiness. Even so, it remains the premier fighting force in the world.

If the trend of using military forces to achieve political ends like nation-building continues and military efficacy is judged by the results, however, America will continue to struggle to achieve its foreign policy aims. More spending on bombs and bullets will do little to change this outcome.

A better, and cheaper, investment would be in the skills, knowledge and resources needed to follow up military victories with durable political settlements, to anticipate terrorist attacks and to dry up support for terrorist organizations.