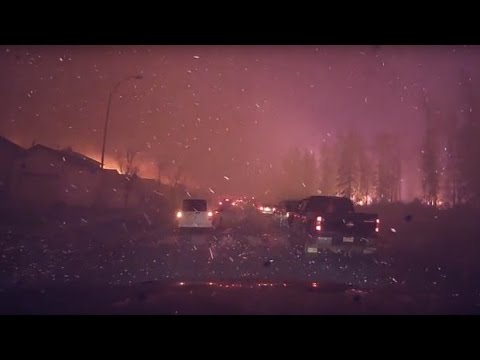 Syrian refugees in Canada are using Facebook and web sites to raise donations for climate refugees from the massive tar sands fire that has destroyed much of Fort McMurray in Alberta, Canada and forced the evacuation of 80,000 people living in the city and its surroundings.

The worst fire disaster in the North American west coast in a century is expected to become even bigger in coming days, fanned by heavy winds. It will threaten further communities.

“Hello. Canadians have provided us with everything and now we have a duty we must do we must help the people who lost their homes and everything in a fire Oil City. We all have our things in the home can donate them there would be a place to assemble the furniture. Get ready it’s time to fulfill

A. Paul: Very thoughtful…so glad you have come to Canada.

C. Sunderlin: You are Canadians… and don’t let anyone tell you differently. heart emoticon

Sam Nammoura quoted Rita Khanchet at the Facebook page, “We understand totally what they’re feeling because we’ve passed through the same situation—we lost everything in just one second, maybe not from burning, but it still feels the same.”

A. Colthorpe replied to him at FB, “I’m sharing on my site. Very proud of our Syrian friends reaching out. Those who have so little are ready to share! Like you said Sam, they know all too well what the people in Ft Mac are facing. Good for them to see the need and rise up!”

Annalise Klingbeil of the Calgary Herald wrote that the drive was begun with an Arabic posting on a private Facebook group for Syrian refugees in Alberta province by recent arrival Rita Khanchet:

“It’s not easy to lose everything. We can understand them more than anyone in Canada. We were in the same situation . . . Me and my family wanted to do something for these people. Canadian society helped us when we came to Canada . . . (Canadians) gave us everything. And now it’s time to return the favour . . .”

That's what I meant when I said refugees will make great Canadians! I didn't know it would happen so fast #ymmfire https://t.co/78tKbfbdj7

Syrians are collecting $5 apiece from the community to buy basic hygiene items for those who had to flee Fort McMurray.

Lucie Edwardson of the Calgary Metro also wrote on the story, and conveyed this touching anecdote– reporting that Khanchat explained what was happening to the people of Fort McMurray to her 5-year-old son, Elie, and he immediately understood and wanted to swing into action:

“He started collecting his toys and items for the other kids . . . He wants them to have them because he remembers too what it was like to lose his own.”

Calgary Syrian refugees give back with support for Fort McMurray evacuees. Because Canada. https://t.co/63TOF5nyWI via @metrocalgary

Ironically, some of the turmoil in Syria derives from climate change, which exacerbated the country’s prolonged drought and drove rural farmers off their land to festering slums like East Aleppo and the bidonvilles around cities like Hama and Homs. These suffering populations in turn joined demonstrations against the regime, and when they were met with brute force, turned to Muslim fundamentalist militias, throwing the country into civil war. The war is complex and has many roots, but my guess is that 20% of the drought is climate change-related (the latter process causes droughts in the Middle East to be more frequent, last longer, and be hotter).

The wildfire in northern Alberta is likewise exacerbated by human-caused warming because of burning fossil fuels (like tar sands!).

So the two sets of refugees have more in common than they perhaps even realize.