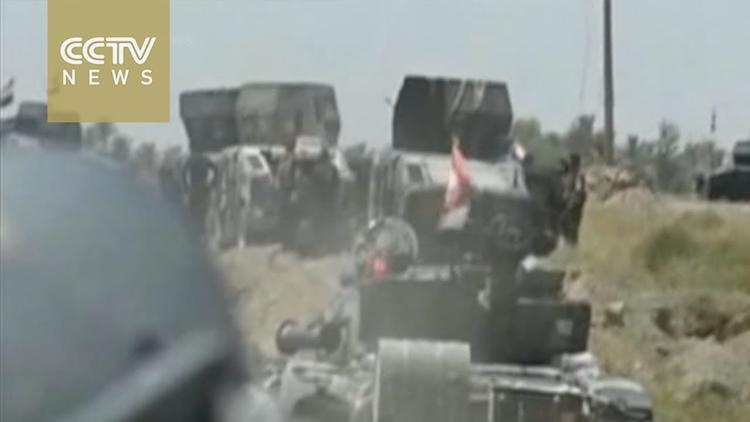 Iraqi Prime Minister Haydar al-Abadi said Thursday that his troops were in position to move into the city of Fallujah from the south, after advances made during the past two days, but that he would “slow down” the assault for fear of civilians trapped in the city. The Iraqi military and its Shiite militia auxiliaries have met with fierce resistance by Daesh (ISIS, ISIL) fighters holding the city, which fell to them in January 2014.

Estimates of non-combatants still inside the city range from 20,000 to 50,000 and there is fear they will be caught in the crossfire or hit in artillery barrages or aerial bombardment. Daesh has more or less kidnapped them and is making it very difficult for those in the city center under their watchful eye to flee.

Yet Russia Today reports that Iraqi forces are continuing a steady advance on the city from all four directions, especially from the south, where they have taken Apple Bridge. They unfurled an Iraqi flag over the bridge.

Iraqi Sunni lawmakers have criticized the participation in the campaign of Shiite militias, given that Falluja is a bastion of Sunni Islam, and they have also been scathing about the planning role assumed by Iranian commander Qasem Soleimani, head of the the special forces or Jerusalem Brigade (Quds Brigade) of the Iranian Revolutionary Guards corps.

Iran is alarmed that Daesh considers Shiite Muslims to be apostates who renounced true Islam (this is not true). Daesh is therefore a strategic danger to Iran, which is why that country has played such a forward-leaning role in the Fallujah campaign.