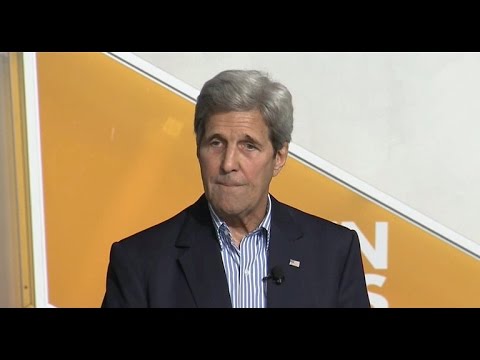 “It has been more than one year since Daesh has actually launched a full scale military offensive, and that’s because our coalition is moving relentlessly on every front . . . Now, yes, you can bomb an airport, you can blow yourself up. That’s the tragedy,” he continued. “Daesh and others like it know that we have to get it right 24/7/365. They have to get it right for ten minutes or one hour, so it’s a very different scale . . . And if you’re desperate and if you know you are losing, and you know you want to give up your life, then obviously you can do some harm.”

Everything is so partisan in the United States that Kerry’s remark drew a sharp rebuke from Congressman Mike McCaul (R-Texas), chair of the Homeland Security said that it “defies reality.” McCaul said that President Obama and Kerry had been saying that ISIL is “on the run for many years, and they’re not — they’re on the rise.”

So who is right here?

There is no reasonable metric whereby Daesh (ISIS, ISIL), is “on the rise.” It is McCaul who is detached from reality on this point.

Since its apogee in summer of 2014, I figure Daesh has lost some 60% of the territory it once held in Iraq. The US government was saying it had lost 40% last January, and since then both Ramadi and Fallujah have fallen to the Iraqi government, along with Hit and other areas, including territory north of Beiji. In fact, the losses may be more like 70% in Iraq.

All Daesh really has left in Iraq is Mosul and its hinterland. Given what has happened in the first half of 2016, it doesn’t seem to me that Daesh will have Mosul next year this time. As a “state,” Daesh is being rolled up.

Likewise, in Syria it has lost Palmyra and the northern half of al-Raqqa province, and has all but lost the key transport node of Manbij. Although press reports typically say the estimate is that they have lost 20% of their Syrian territory, it has to be more. Half of their main province, al-Raqqa, would be more like a third of total holdings in Syria.

The red on this map shows what Daesh has lost since February:

There is no way to look at this history of the past two years and conclude that Daesh is “on the rise.”

They will lose all their territory, and still be able to launch terrorist attacks. But they wanted to be a state, and on that they will lose.

What is really funny is that the US Republican rightwing is now actually invested in Daesh being a success story. The national security narrative is seen by them as an asset. McCaul knows very well that Daesh is going down, but is alarmed that the Kerry story about it might be accepted by the public.

RT: ” ‘You cannot negotiate with a mad dog – and that is what ISIS is’”