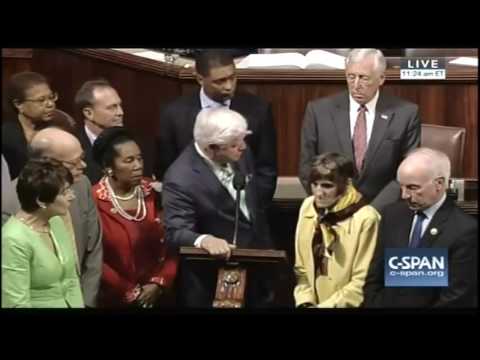 Democrats have been demanding changes to gun control policy in the wake of the Orlando club shooting.

Led by civil rights icon John Lewis and John Larson, almost 40 Democrats walked in before noon and pledged to “occupy” the House floor until the GOP leadership allowed a vote. Over the course of the hour, their number more than tripled.

Over the past week, Democrats tried numerous times to force a vote on a so-called “no fly, no buy” bill, which would prevent terror suspects on the “no-fly” list from purchasing guns. This sit-in, however, also sought to put political pressure on Speaker Paul Ryan to allow a roll call on gun control.

But by early afternoon, there were no signs that Republicans would allow for a vote.

“We have been too quiet for too long,” Lewis said during the meeting, as published in Politico. “There comes a time when you have to say something. You have to make a little noise. You have to move your feet. This is the time.”

The protest caught the Republicans off guard. After Lewis, as another House Democrat prepared to speak, the GOP lawmaker presiding over the chamber abruptly declared the House was in recess and shut off microphones. The cameras also followed since, technically, the House was not in session.

Democrats proceeded to sit down on the floor or stood by the front podium. They then began reading the names of those who died in the June 12 shooting at the Florida nightclub, Pulse.

“We’ve had it. We’re not going to watch any more people in this country get slaughtered and do nothing!” Rep. Mike Doyle yelled during the protest.

Since there were no cameras, the House Democrats took to tweeting their protest, posting pictures online, and live streaming the sit-in on the Periscope app.

Sen. Chris Murphy who led a 15-hour filibuster on the Senate last week, showed up to encourage Democrats.

“I hope they stay in there for as long as it takes, through the day, through the night, until they get a vote,” Murphy said, as reported by Politico.

Some Democrats carried their protest outside, taking turns to speak as gun violence protesters stood next to them, some wore “We are Orlando” shirts and held up pictures of gun violence victims.