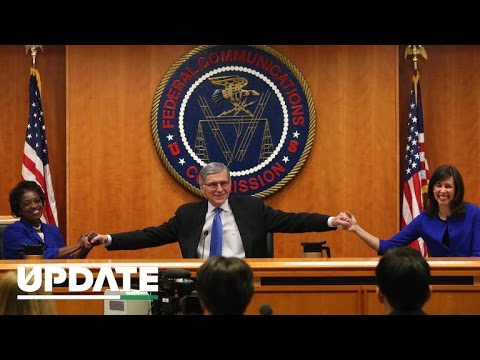 In a crucial win for Internet users, today a federal appeals court upheld [PDF] clear net neutrality rules that will let us all use and enjoy the Internet without unfair interference from Internet service providers. The rules will keep providers from blocking or slowing traffic, or speeding up traffic for those who pay.

Last year, EFF and other advocacy groups, along with millions of Americans, called on the FCC to do its part to defend Internet expression and innovation. We urged them to adopt focused rules based on a legal framework that would finally stand up to the inevitable legal challenge, but also limit their own authority in order to help prevent a future FCC from abusing its regulatory power. The FCC responded with an Open Internet Order that largely did just that.

The court today affirmed that Order.

In the process, the court firmly rejected a host of legal and policy arguments from major service providers. In fact, it was a blowout. Did the FCC have the authority to issue such rules? Yes. Did it follow proper procedures? Yes. Are the rules constitutional? Yes.

This is good news for the Internet. The net neutrality rules were a clear victory for the people of the Internet over special interests, and today the Court solidified that victory.

At the same time, we note a few elements of the decision that don’t quite match with the way we would have analyzed the matter. For instance, we are not fans of the “general conduct rule,” a catch-all provision that allows the FCC to police telecom practices on an ad hoc basis. The FCC says that decisions will follow a “seven-factor analysis,” but we do not know how the factors will be weighed. We urged the court to interpret the rule in a way that would create more certainty and prevent possible abuse by a future FCC, but the court did not believe this was necessary.

We are also concerned about the possible expansion of one of the FCC’s authorities. While the rules were, for the most part, clearly grounded in specific powers granted to the FCC, the Court also justified some on the basis of a less-clear provision: Section 706. Section 706 tasks the FCC with promoting the deployment of broadband Internet service. The FCC believes that this grants it broad authority to impose whatever regulations it believes will increase broadband deployment. We would prefer to see a limited, concrete authority used as the basis for regulation, and we are concerned about what restrictions a future FCC, less sympathetic to the open Internet, might impose with such broad-seeming authority.

We will be watching the FCC’s actions, and will challenge any overreach if necessary. And we will doubtless need to defend the gains we have made – the telecoms will doubtless seek to challenge the ruling in Congress and the Supreme Court.

But for now, the Internet should celebrate — our hard work has paid off once again.

Net neutrality in the US is safe, for now (CNET Update)