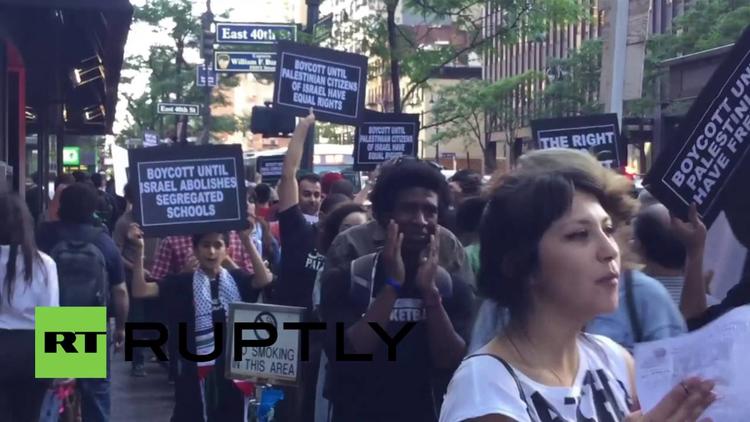 On June 5, Gov. Andrew Cuomo signed an executive order to create a blacklist of entities that support the boycott, divestment and sanctions, or BDS, movement for Palestinian rights and remove New York State funds from any “institution or company” determined to advocate for or participate in the BDS movement.

In response, protesters picketed outside Cuomo’s New York City office on June 9. The crowd was a mix of old and young — teachers, musicians, lawyers and journalists. They sang, “He blacklists. We protest. Boycott, sanctions and divest,” as a drummer marched them along. “Boycott worked in Montgomery and South Africa and it will work in Occupied Palestine,” read a sign carried by one protester.

“He [Cuomo] was telling us we can’t boycott — that hit my heart,” said Robert Hubbard, a 29-year-old veteran. “They were taking away our freedom of expression. Right is right. Wrong is wrong.” Hubbard said his experiences in Iraq and Afghanistan drew him to social movements and activism. “I know real Muslims aren’t bad,” he said. “The people in Palestine are the real victims.”

After the order was signed, an emergency meeting was convened between members of Jewish Voice for Peace, Adalah-NY, and Jews Say No, to organize a concerted effort against the executive order. Mindy Gershon of Adalah-NY said more protests were to come, until the executive action against the BDS movement is rescinded. Another protest is scheduled to take place in Albany on Wednesday.

Adalah-NY, among many other civil liberties groups, have called the executive order “blatantly unconstitutional and shamelessly designed to attack the movement for Palestinian rights.” However, in doing so, the governor may inadvertently be making the movement stronger by drawing supporters of not only Palestinian rights, but also free speech advocates who see the action as an afront to a constitutionally-protected right to free expression — which political boycotts fall under.

“Thankfully, we have a constitution in the United States that protects our rights to dissent from the views of political elites like Cuomo, who believe they are scoring political points by trampling on our First Amendment rights,” said Dima Khalidi, director of Palestine Legal. “The order is unconstitutional and Cuomo will find himself on the wrong side of history.”

If anything, this latest maneuver by the governor only emphasizes the growing strength of the BDS movement and serves as a recognition of its threat to Israel’s political status quo. “In signing the order, Gov. Cuomo only made BDS stronger,” said Beth Miller, an organizer for Jewish Voice for Peace.

Cuomo seems to be an attempting to co-opt the language of BDS in order to de-legitimize the movement. After signing the executive order, Cuomo told members of the Harvard Club in midtown Manhattan that, “It’s very simple. If you boycott Israel, New York will boycott you.” However, if the action outside the governor’s office is any indication, New Yorkers will continue to boycott and protest for Palestinian rights despite his political calculus.