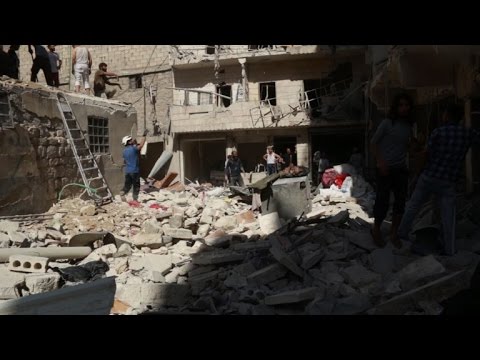 Jordan’s Arabic daily al-Dustour [Constitution] is reporting on what it calls ‘the Great Battle for Aleppo.’

The cessation of hostilities never included the radical al-Qaeda affiliate, the Nusra Front or Support Front. It kept attacking regime-held areas south of Aleppo, trying to cut supply lines to West Aleppo. Unfortunately, some of the US-backed Free Syrian Army remnants allied with al-Qaeda in these offensives. Russia used air power to hit back hard, sometimes striking not al-Qaeda but US-backed rebels. Those attacks led US Sec. of State John Kerry to warn a couple of weeks ago that the US was losing patience with Russian and Syrian regime attacks on Free Syrian Army units. But Russia complains that Kerry, despite his promises, has been unable to separate the FSA fighters from their al-Qaeda allies, so it is inevitable that some of the former would get hit in Russian airstrikes on the latter. Last week the Russians said it is they who are losing patience, with the failure of the US-backed ‘vetted’ groups to dissociate themselves from al-Qaeda and its offensives, which break the cease-fire.

These squabbles over details cannot hide a very big elephant in the room, which is that Russia and the Damascus regime of Bashar al-Assad want to take East Aleppo.

This move is not justified in any defensive way. Al-Qaeda isn’t big in East Aleppo, though some of the FSA units have gone pretty far in the fundamentalist direction and are considered terrorists by Moscow. This offensive is a naked power grab, and if it succeeds it could translate into more years of survival for al-Assad and his Baath government.

Al-Dustour says that Russian and Syrian fighter jets (apparently in tandem) have for the past few days been subjecting East Aleppo and the area immediately to its north to intensive aerial bombardment, in support of Syrian Arab Army troops of the regime who are attempting to surround the opposition brigades in the east of the city. The SAA is being helped by Lebanon’s Shiite Hizbullah militia, which has vowed to send more fighters to Aleppo.

The aerial bombardment of East Aleppo did not stop Saturday night at all and continued into Sunday morning. The Syrian observatory alleged that the Russian strikes have been aimed at a road in the north of the city which constitutes the last supply route into the east. The Syrian air force has been bombing East Aleppo itself. Some three dozen have been killed by this bombing, including civilians.

AFP from a couple of days ago: ” Syrian regime airstrikes kill at least four in Aleppo”