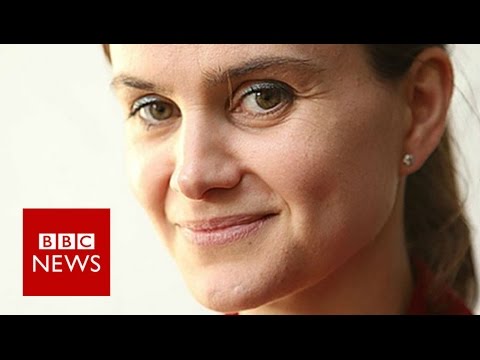 The assassin shouted “Britain First!” as he repeatedly stabbed Jo Cox in the stomach with a hunting knife and then shot her with an old revolver several times. He also cut a 77-year-old man who unsuccessfully attempted to intervene.

Cox, 41, and mother of two, served as a Labour member of the Mother of Parliaments from the constituency of Batley and Spen in West Yorkshire (north-central Britain).

Cox had been campaigning for the United Kingdom to remain part of the European Union, opposing what is being abbreviated as Brexit or a British Exit from the EU.

The far right in Britain sees European Union membership as having opened the floodgates to millions of immigrants. Anyone from any of the other 27 European Union member states can go to Britain in search of a job. It is true that lots of French, Poles and others have gone there, but as always with immigration it isn’t at all clear that they have taken jobs from Britons– a lot of times they are doing menial work it would be hard to find a Briton to do. New businesses have been made possible by this expansion of the work force, making the UK economy more dynamic and robust.

Moreover, only about half of the immigrants to the UK come from Europe– the other half come from the former British Empire and Asia.

A discourse of “Britain First” (the name of a far, far right political group that denies any connection to this crime), hatred of immigrants, and Islamophobia have all poisoned British politics for several years.

The assassin, 52, is being looked at for connections to the far right, as well as for mental problems (with the white terrorists, it is always mental problems).

There are reasons for which ultra-nationalism leads to violence. It is a black and white view of the world, with good and evil and nothing in between. The in-group is exalted, those defined as being in the out-group are debased. As Brian Porter argues, there can develop a hopelessness and impatience that ultra-nationalist goals can be reached in any relevant time frame, or will necessarily ever be reached at all– and so direct action must be taken. Now.

In contrast, Liberal politics (in the 19th century sense that includes both US conservatives and liberals of today) believes that universal suffrage can extend the nation to all citizens of all backgrounds. Liberal politics is inclusive, not divisive and hateful. And, Liberal politics holds that things can be improved over time despite momentary setbacks.

Donald Trump is much more like the virulent turn-of-the 20th century Polish nationalists that Porter describes, who became racists and extremists and gave up liberalism.

Trump’s slogan is “America First,” by which he means that the interests of the white Protestant elite of the US must be put first, over all other foreign policy considerations. Trump demonizes members of minorities– undocumented Mexicans are “rapists” e.g. He tars all Muslims with the brush of terrorism even though 99.99% of them are perfectly peaceful law-abiding people. He advocates torture. He urges followers to physically attack protesters and promises to pay their legal fees. He wants to kidnap and perhaps torture innocents related to bad guys. And, Trump does not view the presidential campaign as a friendly contest between two political visions. It is apocalyptic. America, he says, will go to hell if Sec. Clinton is elected. Trump does not respect the rule of law or the constitution. His policies must be enacted even if they are illegal or unconstitutional because “we have to have a country.” Nationalism trumps all else, even the organic law of the nation itself.

This kind of talk has an underlying logic of violence, and it is no accident that violence has broken out at Trump’s increasingly poorly attended rallies.

The British far right speaks the language of Trumpism, as well. For at least one of its members, that language and that logic has led to a shocking murder of a politician who supported a more open Britain.

That kind of violence is latent in the discourse of Trump and his acolytes in this country, as well. Jo Cox’s assassination should make us all wary of ultra-nationalism and where it can take our countries.