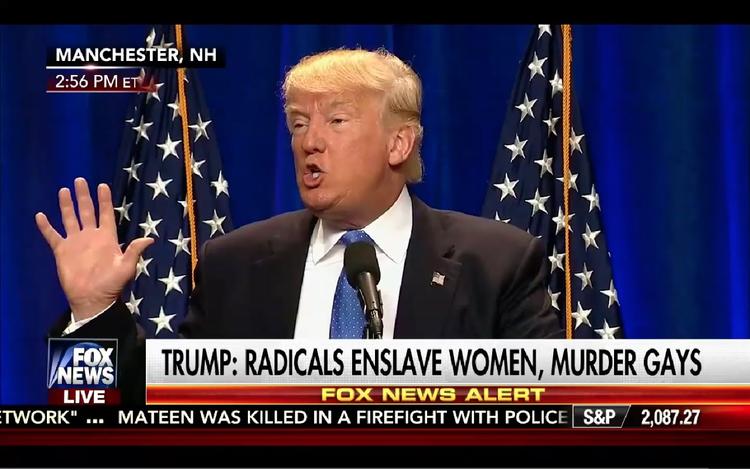 Those who’ve been wondering when Donald Trump would switch from the wild bombast of his primary campaign to the sober mode traditionally demanded by a general election now have their answer: never.

The dreadful gun massacre at the Pulse club in Orlando, Florida on June 12 presented Trump with as clear an opportunity as he will ever have to rise above his well-earned reputation for bigotry and divisiveness and to find the presidential voice more becoming of a major party nominee.

Instead, he opted to double down on the traits that most terrify those who regard the prospect of his presidency as a threat to national security.

This is not hyperbole. To get a full sense of just how unmoored Trump is, let’s just cast our minds back to September 2001, when George W. Bush was called upon to govern in the aftermath of the worst terrorist attack on American soil in history.

9/11 put conflict with terrorists citing extreme Islam as their ideology at the centre of US security policy, but on one rhetorical point, Bush kept his feet on the ground: Muslims as a group should never be conflated with the tiny sliver engaged in violent extremism. Moderate Muslims, which is to say, the overwhelming majority of Muslims, both in the US and overseas, must be treated as crucial allies.

In his remarks after Orlando, Donald Trump took this standard of discourse, set light to it and stamped on it.

First, he appeared on Twitter, his favoured medium for rash, unreflective pronouncements, to claim the attack as evidence of his correctness in having called for more aggressive policies and to thank all those he claimed had congratulated him for his prescience.

In interviews and most of all in a speech in the hours that followed, he reiterated his pledge to impose a total ban on Muslims entering the US. He blamed “political correctness” for allowing such attacks to happen. He highlighted the decision to allow the Orlando shooter’s Afghan parents to enter America as the root cause of the threat.

He warned Muslim Americans of “consequences” unless they co-operate with “us” by turning over the terrorist sympathisers in their midst, suggesting that they “know where they are”. He asserted (inaccurately) that refugees and asylum seekers were admitted to the US without background checks, and that his opponent Hillary Clinton favoured admitting hundreds of thousands more Muslim incomers on this basis.

Most outlandish of all, he mused aloud that President Obama might himself be in sympathy with the terrorists. And when it dared to report and parse his semi-coherent remarks, the Washington Post then had its credentials for access to the Trump campaign revoked.

Combined with Trump’s longstanding promises to intensify the bombing of Islamic State-held territory (which could only be done by knowingly bombing civilians), to return to waterboarding and other torture, and to kill terrorists’ families, and one could not design a platform better designed to alienate Muslims worldwide.

It is no exaggeration to say that implementation of Trump’s platform is exactly the Islamic State’s hope: to present Muslims with a binary choice between itself and an irreconcilably hostile West.

Trump’s post-Orlando performance has sent a new wave of horror through those senior Republicans who find themselves manacled to him for the rest of the campaign.

Even in the week before the massacre, senior party figures such as Speaker of the House Paul Ryan and Senate Majority Leader Mitch McConnell had publicly rebuked their presidential nominee for suggesting that federal judge Gonzalo Curiel could not fairly adjudicate in a case against one of Trump’s businesses because he was “Mexican” and therefore biased against him (Curiel is from Indiana). Ryan, who had said he will vote for Trump only days before, said this fit the “textbook definition of a racist comment”.

Now these most reluctant supporters find themselves obliged to say whether they endorse their candidate’s litany of falsehoods regarding Muslim immigration or his plan to abruptly terminate it. Ryan has publicly said that he does not.

There is an argument that Trump is simply the predictable apex of a trajectory the Republican Party has been on for some time. For years its candidates across the country have appealed to their voters’ fear of the threat presented by non-white “others” as a way of mobilising support and attacking opponents.

But Trump is far more frightening than any recent Republican candidate of note. He has not stayed within the rules of the insidious dog-whistle playbook; he has expanded them dramatically, both with the explicitness of his appeals and the extremism of his actual proposals.

His persona seems not to be a calculated act, a front behind which lies a cool and balanced actor with rational plans. On the contrary, his intellectual incoherence and erratic emotionalism appear to be his most genuine features.

Perhaps Trump could have shown a new, restrained and responsible self in his response to Orlando, and simply chose not to – or maybe he is actually incapable of modulation and reflection. Perhaps he simply doesn’t have another face to show the world. What we can now be sure of is that he isn’t going to change.

He is a new departure for modern America: a European-style ethno-nationalist populist of a kind largely alien to either the conservative or liberal camps of American politics. His election would represent a turn away from much of what has hitherto made the US exceptional, and towards the dark side.