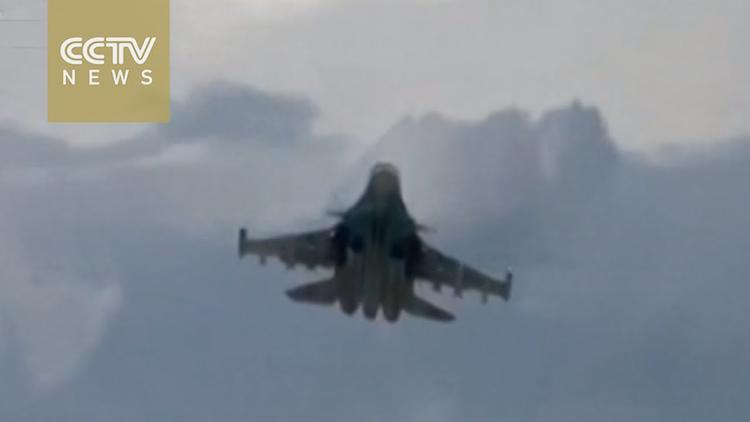 On Wednesday President Vladimir Putin addressed the Russian parliament on the 75th anniversary of Nazi Germany’s attack on his country. He said Russia would have to increase its military preparedness given NATO’s “aggressive” actions on Russia’s borders. (He was talking about NATO defensive moves in Poland and the Baltic states). Putin lamented that it would have been possible for the West to find a way to cooperate on security with Russia in the face of the threat from terrorism, but that it hadn’t tried.

At the same time, Russian Defense Minister Sergey Shoygu made a surprise visit to Damascus. Speculation ran rife as to the reason for the visit.

BBC Monitoring translates from Trud, “The Russian defence minister’s visit was somewhat of a surprise to experts, although he does visit Syria regularly,” Boris Dolgov, senior scientific assistant at the Russian Academy of Sciences Institute of Oriental Studies Arab and Islamic Research Centre, explained to Moskovskiy Komsomolets. “But the meeting with Al-Asad was important. Of course, it was connected to the memorandum from the State Department officials, who were demanding that the US authorities undertake more resolute actions against the Syrian government army, and to the US complaints about the actions of the Russian Aerospace Forces. In my view, Shoygu saw for himself on the spot the plane on which the Russian Aerospace Forces’ operations are proceeding and what the situation in Syria is like. One further point about the visit: It is the continuation of the process of the signing of the agreement on a cease fire by the armed groups which are operating against Al-Asad’s army but which are not radical. In my view, that was also within the sphere of what Shoygu was inspecting.”

The deputy Minister of Defense, Gen. Valery Gerasimov (also the Chief of the General Staff of the Armed Forces of Russia) implicitly hit back against US Secretary of State John Kerry. Kerry had warned last week that the US was losing patience with the Syrian regime’s attempt to take east Aleppo, in violation of the cessation of hostilities arrived at in February. On Wednesday, Gerasimov said it was Russia who is losing patience, with US-backed rebels who are sometimes making tactical battlefield alliances with radical groups.

Gerasimov said that for the past three months, Russia has been supplying the US with detailed information on the locations and movements of Daesh (ISIS, ISIL) and al-Qaeda in Syria (the Nusra Front), but that the US appears to have made no use of this information in its bombing raids at all. He blamed American refusal to cooperate for the ripostes that Daesh has been able to make against the campaign of the Syrian Arab Army to retake a military base in al-Raqqa province, a campaign that has failed.

The Russian press is also suggesting that there is a split between President Obama and John Kerry on Syria, inasmuch as Obama is said to be tired of the State Department’s requests that he expand US military operations in Syria. This week some 50 hawkish State Department employees called for Obama to bomb the Syrian government, which is said to have alarmed Moscow (which is backing the regime of Bashar al-Assad.)

a href=”https://youtu.be/vt9zmnV2CZE “> CCTV News: “US, Russia jets clash over Syria”