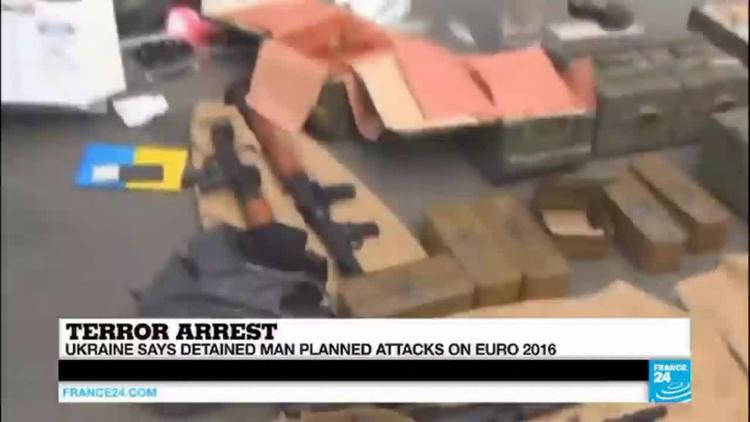 So Gregoire Moutaux, 25, was arrested last month by Ukraine. The French national had a large cache of deadly weapons.

Ukraine Intelligence chief Vasyl Hrytsak said, “The Frenchman spoke negatively of the activities of his government on mass migration of foreigners to France, the spread of Islam and globalisation. He also said he wished to stage a number of terrorist attacks in protest.”

The BBC says, “Mr Hrytsak listed bridges, motorways, a mosque and a synagogue among the suspect’s potential targets.”

Ukraine is investigating Mr. Mouteaux for arms smuggling and terrorism.

But here’s the kicker. France isn’t.

France so far just has him being looked into by the unit in charge of organized crime.

This is so even though Moutaux’s house in France was searched and authorities found “explosive material and balaclavas” (masks). Now explosive materials, maybe he was planning to sell in a dark alley. But balaclavas suggest a plan to do something in public that required hiding one’s identity.

So, I was right about “The Top Ten differences between White Terrorists and Others”.

Apparently Paris suspects that Moutaux is just a run of the mill arms smuggler taking advantage of the situation in east Ukraine.

The BBC even managed to find a neighbor who said that “He’s a rather nice guy, who I think is actually rather well-educated. I’ve even invited him over for a glass of wine. I just can’t understand this.”

It is always the quiet ones.

So obviously Moutaux is innocent until found guilty (actually that isn’t true in France).

But the French reluctance to at least start a terrorism investigation strikes me as very suspicious. Would there have been the same hesitation if Moutaux had been a Muslim?

Would the BBC have sought out that quote about a Muslim accused terrorist being “a nice guy”?

And, then I just can’t get past this one: “The Frenchman spoke negatively of the activities of his government on mass migration of foreigners to France, the spread of Islam and globalisation. He also said he wished to stage a number of terrorist attacks in protest.”

So Ukraine intelligence is reporting that Moutaux himself insists that he planned terrorism.

And there is that little detail of explosives and masks being found in his house. There was also a white supremacist t-shirt.

I can’t understand the reasoning of the French counter-terrorism folks who seem insouciant about all this. Do they think that Moutaux hopes to avoid drug smuggling charges by posing as a terrorist? Would the latter sentence be lighter?

Me, I think Paris needs to take a harder look at its white terrorism problem, which it is clearly reluctant to acknowledge.