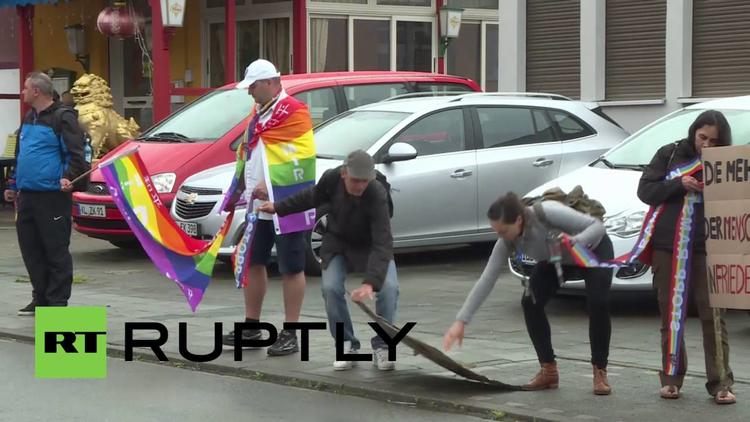 Protesters say the base is being used to coordinate U.S. drone strikes in several countries which they argue violates German constitution.

Several thousand demonstrators formed a human chain along the perimeter of a U.S. Air Force Base in southwest Germany Saturday in protest against drone operations by the United States.

The demonstration was organized by the alliance “Stop Ramstein – No Drone War”, which says the Ramstein base transmits information between operators in the United States and unmanned drone aircraft in places such as Iraq, Afghanistan, Pakistan, Yemen and Syria.

Police estimated 3-4,000 people had formed the chain close to the base, which serves as the headquarters for the U.S. Air Forces in Europe. Organizers spoke of 5-7,000 people.

The use of drones is highly controversial in Germany, where an aversion to military conflict has prevailed since World War Two. Organizers say allowing data for drone deployments to be routed through Ramstein goes against the German constitution and want the base’s satellite relay station to be closed.

Nearly 15 years after a drone first fired missiles in combat, the U.S. military program has expanded under the administration of President Barack Obama to become an everyday part of the war machine for carrying out surveillance and launching strikes.

Recent figures by the Bureau of Investigative Journalism show that by May this year, more than 3,000 people had been killed in drone strikes in Pakistan since 2004 including at least 500 civilians.

In Afghanistan, the group said more than 1,500 people have been killed since 2015 including hundreds of civilians. Obama has launched nine times more strikes with drones in Pakistan, Yemen and Somalia than his predecessor, George W. Bush.