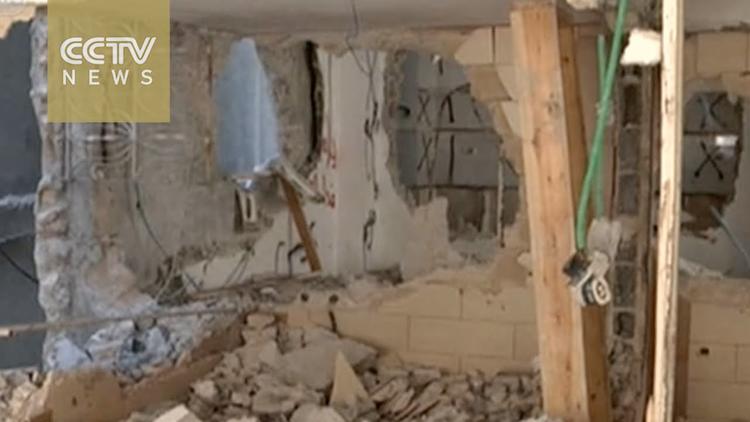 A Palestinian family stands amid the remains of their home after it was demolished by Israeli forces in Masafer Jenbah in an undated photo. (AFP/Hazem Bader, File)
BETHLEHEM (Ma’an) — Israeli authorities have demolished more Palestinian homes in the West Bank in the first six months of 2016 as they did in all of 2015, Israeli human rights group B’Tselem revealed in a report released on Wednesday, in a worrying confirmation of Israel’s ongoing crackdown on Palestinian communities in Area C of the West Bank.

The report, which was also presented by the Arab Joint List during a Knesset conference on Israel’s home demolition policy the same day, said that 168 homes were destroyed during the first half of 2016 for lacking hard to obtain Israeli-issued building permits, leaving 740 Palestinians homeless.

B’Tselem’s report did not include punitive demolitions enacted on the home of suspected Palestinian attackers and their families.

The B’Tselem tally marked a higher count than the total number of houses destroyed by Israeli each year in the past decade, with the exception of 2013, when 175 homes were demolished.

The 2016 statistics marked a drastic increase from 2015, when 125 homes were demolished, leaving 496 Palestinians without a home.

B’Tselem further estimated that Israel had demolished some 1,113 Palestinian homes in the West Bank alone from 2006 to June 2016, primarily targeting Palestinian communities east of Jerusalem, in the South Hebron Hills and in the Jordan Valley — where a large number of illegal Israeli settlements are located.

The group added that during that decade, at least 769 Palestinians in the West Bank, including 340 minors, saw their homes demolished more than once.

During the Knesset conference on the report, Ayman Odeh, the head of the Joint List which brings together political factions representing Palestinian citizens of Israel, said the demolitions showed that in spite of calls by Israeli right-wing groups to annex all of the West Bank, “actually and practically, we know that Israel prefers to perpetuate its control in a gray area… while paying lip service to the international community.”

Beyond homes, B’Tselem highlighted the fact that Israeli authorities also demolished structures Palestinians depended on for their livelihoods, such as livestock pens, sheds, and bathroom facilities, and confiscated solar panels and water tanks.

“In doing so, the Civil Administration not only leaves these residents homeless but also severely lacking basic services and the ability to earn a living,” the report read.

Joint List MK Dov Khenin denounced the demolitions during the Knesset conference as a deliberate move by the Israeli government to annex parts of Area C — the 60 percent of the West Bank under full Israeli military control.

“Demolishing houses, water tanks and solar panels does not happen by coincidence or by mistake,” he told the Knesset. “It is an organized policy that aims to change the current political condition, force Palestinians to leave the area and annex parts of Area C to prevent the two-state solution. Therefore, it is no longer a human rights case but a first-degree political case.”

Natalie Grove, a representative of the United Nations Office of the High Commissioner for Human Rights also present at the Knesset, said that “Israel does not fulfill the minimum of its basic commitments as an occupying power.”

“Israel is creating humanitarian crises, and when the international community intervenes to solve these crises, Israel increases obstacles in front of these interventions,” Grove added. “This policy has led to the worsening of the humanitarian crisis and created the danger of population transfer which leads to a confrontation between Israel and the international community and raises fears that Israel is not serious regarding the two-state solution.”

The publication of the report came two days after some 30 Palestinian families lost their homes during demolition raids of unprecedentedly large scale in the East Jerusalem neighborhoods of Issawiya and Ras al-Amoud, and in the village of Qalandiya in the West Bank district of Jerusalem.

According to the UN Office for the Coordination of Humanitarian Affairs (OCHA), Israel only granted 33 building permits out of 2,020 applications submitted by Palestinians between 2010 and 2014.

The dismal number of permits granted by Israeli authorities has forced many Palestinians to build without permission, at the risk of seeing their homes demolished.

B’Tselem said Israel’s pretexts in demolishing so many Palestinian homes constituted “a spurious claim given the absence of any real possibility for Palestinians to build legally in the area.”

“The Israeli authorities impose an impossible daily reality on Palestinian communities in Area C,” B’Tselem concluded in its report. “Israel acts to establish facts on the ground and to create a reality that it will be difficult to change in any future agreement.”