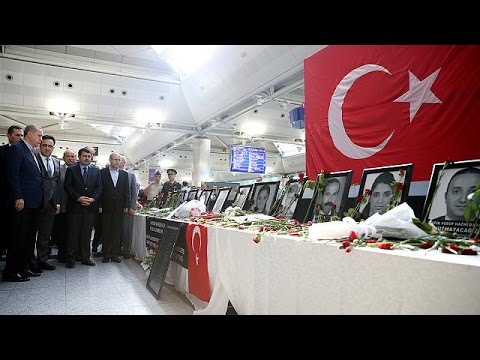 Once the external anchor of Turkey’s democracy, the EU‘s normative influence has sunk as low as its reputation among its many erstwhile supporters, who now feel betrayed and abandoned.

Shortly after the attack on Istanbul’s Atatürk airport on Tuesday night, a Greek colleague posted on his Facebook wall a message of solidarity with his Turkish friends. “Hang in there”, he wrote. “You are not alone.” One of his compatriots disagreed: “I think they are alone”.

“They are alone between an authoritarian government working on [its] own agenda and [a] Europe that reaches out to them when looking for favours. Secular, western looking Turkey is very much alone.”

The truth could not be expressed more bluntly. Amidst the maddening routine of mass suicide attacks, prayforistanbul hashtags, media blackouts and messages of sympathy and solidarity from world leaders, many  in Istanbul and across Turkey feel increasingly alone and despondent in the face of a thick darkness engulfing the country ever so tightly. The EU‘s normative influence here has sunk as low as its reputation.

No one expects these attacks to be properly investigated or, for that matter, to be the last ones. Assuredly, no one will resign. As usual, a gag order was issued immediately and President Erdoğan’s puppet prime minister summarily concluded there had been no security failures (even though the Turkish intelligence service apparently warned of a threat precisely against this airport only weeks ago). The next morning, the AKP deputies in Ankara killed a proposal by three opposition parties to establish a parliamentary commission to investigate the attacks – just like they did after the Suruç and Ankara attacks last year. On Thursday, the prime minister spoke at the inauguration of a new bridge. His opening words under a rain of confetti: “Today is a day of celebration…”

Erdoğan’s government indeed has an agenda: total control of Turkey’s state institutions and complete legal impunity for its criminal actions. Tuesday night’s attack did not divert it from this task. Late into that same night, the AKP parliamentarians were busy voting into law a major court packing bill that will drastically reduce the ranks of Turkey’s higher courts and replace them with jurists handpicked by the president – the final nail in the coffin of Turkey’s wobbling judiciary. The law follows another that passed last week, granting immunity from prosecution to security personnel and civil servants involved in counter-terrorism activities – a task which these days involves hunting down academics, journalists and students, as well as militants.

As Turkey descends into dictatorship and chaos, a hapless European Union announced on Friday the opening of a new chapter in the country’s accession negotiations, fulfilling its role in the dirty bargain struck with Erdoğan over the lives of refugees. Once the external anchor of Turkey’s democracy, the EU‘s normative influence here has sunk as low as its reputation among its many erstwhile supporters, who now feel utterly betrayed and abandoned.

One friend’s social media outburst after the airport attacks summed up the growing sense of suffocation among the young, urbane population of Istanbul:

“There is no exit. No way out of this hell.

Even if you wanted to abandon everything and fuck off from this country, you would have to go through the airport. And there is no way out of there either.

In Istanbul, like in other Turkish metropolises, a grim despondency has been taking over the upbeat optimism of younger generations, who, until recently, had a love affair with this city, its buzzing vibrancy and breathtaking landscape, despite its endless construction sites and crazy traffic.

These are the accidental activists who poured onto streets and squares three summers ago to save Gezi Park from demolition and push back an overbearing government. Since then suppression has grown more intense, violent and pervasive. Politics has failed them: a spineless CHP has done more to help than to resist the AKP’s monstrous transformation, while the constructive energy harnessed by the pro-Kurdish leftist HDP ahead of last summer’s general election has been sacrificed on the altar of war between the Turkish state and the PKK. The government is apparently more concerned about the threat from high school students than militant jihadism.

Last month, a student protest in a high school graduation ceremony in Istanbul over the Islamisation of education quickly spread to other high schools across the country, among them Turkey’s most established and prestigious ones.

The president swiftly issued a stern warning against “provocateurs”, followed by a Ministry of Education statement about impending investigations against those who took part in or supported the protests (the government is apparently more concerned about the threat from high school students than militant jihadism). For many, the price of dissent has become too high. More people now censor their own social media activities for fear of prosecution and avoid public places and demonstrations for fear of an attack or confrontation with the police – possibly both.

Unsurprisingly, leaving the country is on the lips of many young people, albeit in different forms. Some think of it as the sensible thing to do. Applications to study in European and American universities have reportedly skyrocketed in 2016. But leaving one’s home, family, country is easier said than done. In any case, except for a privileged minority, the whole venture can be prohibitively expensive and, given the tight visa restrictions, simply unattainable.

Others think of it as a lowly escape; a dishonourable and unthinkable act. They may not take part in the increasingly precarious world of social activism (a dedicated core still do at the risk of being labelled as traitors and terrorists).

That the talk of leaving still includes visa applications and plane tickets – and not smugglers and boats – speaks volumes to the colossal distance separating the depressed residents of the cosmopolis from their new refugee neighbours.

For any of the three million plus Syrians that arrived in Turkey since 2011, a city like Istanbul may well represent escape from imminent death. For their reluctant hosts – who have on balance proved to be endlessly more accommodating than most, if not all, European, North American and Gulf Arab countries – the wretched newcomers are harbingers of trouble, instability and other unknown ills. In Istanbul, one’s cure is truly another’s poison.

The same assumption of normalcy, rebellious when in defiance of government imposed public morality, can become cruel and shameful when it takes the form of ignoring the existence of refugees or turning a blind eye – out of fear of retribution or nationalistic consent – to the state’s ongoing destruction of Kurdish towns and the plight of more than 500,000 Kurds internally displaced since last summer.

The “secular, western looking Turkey” is also alone, because it continues to disregard the east, at its own peril.

For all the unbridgeable gaps separating their universes, there is something fundamental that binds the fate of the Syrian or Kurdish refugee with that of the Istanbul urbanite and indeed the distraught post-Brexit Londoner or the New Yorker who muses about moving to Canada if Trump wins in November: they are all travelling on the same overcrowded refugee boat and it is slowly sinking.

Those who are at the bottom are drowning. The ones in the middle are feeling the pressure and panicking. Up on the deck, first-class passengers are busy locking the hatch leading down, momentarily comforted by the fake safety of privilege.

The appropriate name for this ill-fated boat would be ‘Civilisation’. Like the Titanic, it was foolishly claimed to be unsinkable. When it struck the iceberg, its hull ripped apart like paper. We should have known that if Baghdad could fall, if Aleppo could crumble, so could any city on earth. Yet as Iraq and Syria were being consumed by fire – with governments of ‘civilised’ countries fanning the flames – those of us in the middle and upper tiers followed the terrifying spectacle in the safety of our homes and on TV screens as if watching an episode of the Game of Thrones: this was not of our civilised world. In any case, our walls would prove high enough to keep the wildlings out. The last time so many calamitous trends converged at once, it took the destruction of two world wars to reset things.

Turkey is in the middle of this boat. Here, Erdoğan’s imaginary Ottoman empire has started to crumble before it was even established. His jihadist chickens – nurtured to re-conquer for him the lost provinces of the Levant – have come home to roost: it was apparently an ISIS-inspired cell, with homegrown and foreign terrorists, that struck at the heart of the empire during the holy month of Ramadhan, killing mostly Muslims. In the Kurdish southeast, the state’s year-long brutal vengeance will spur generations of radicalised Kurds, facing a sea of Sunni Turks overflowing in religious zeal and nationalist anger.

There is a cautionary tale for everyone in Turkey’s unfolding tragedy. It is a tale of false prophets who capture democratic institutions by exploiting the resentments of the masses dispossessed by the forces of globalisation and self-serving political classes; demagogues that are full of arrogance but short of substance, leading entire nations to ruin. If this sounds like what’s happening in Britain, across Europe and the United States these days, that is because they are deeply connected.

The last time so many calamitous trends converged at once, it took the destruction of two world wars to reset things. We might still avoid such meltdown, but for that, the dejected millions in those countries that have yet to pass the point of no return must shake their torpor and realise that their fate – and salvation – is tied to those who have lost everything. The seas are rough, we have one boat and it needs fixing.