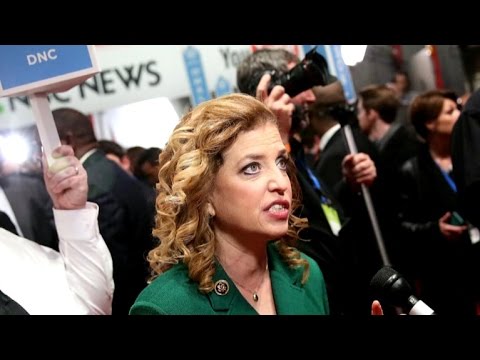 Her resignation came hours after Bernie Sanders called on her to step down after emails showed how biased she was against his campaign.

Clinton unapologetically issued a statement praising “longtime friend” Wasserman Schultz and said she would serve as a surrogate for her campaign.

“There’s simply no one better at taking the fight to the Republicans than Debbie–which is why I am glad that she has agreed to serve as honorary chair of my campaign’s 50-state program to gain ground and elect Democrats in every part of the country,” she said.

Florida congresswoman Wasserman Schultz said in a statement, “I’ve been proud to serve as the first woman nominated by a sitting president as chair of the Democratic National Committee.

“I couldn’t be more excited that Democrats are nominating our first woman presidential candidate, Hillary Clinton, a friend I have always believed in and know will be a great President.”

Donna Brazile, DNC Vice Chair, will serve as interim chair from DNC through the election in November.

Her announcement came just hours after Bernie Sanders, who had long accused her of bias during his long primary campaign against Clinton, repeated a call for her departure.

In a statement, Sanders said, “Debbie Wasserman Schultz has made the right decision for the future of the Democratic Party … the party leadership must … always remain impartial in the presidential nominating process, something which did not occur in the 2016 race.”

According to the DNC emails leaked by Wikileaks Friday Wasserman Schultz and her staff shared their exasperation with Sanders, making jokes about him and calling him ”stupid” and a “mess”.

President Barack Obama, who also seemed to favor Clinton from the beginning, said he was “grateful” for Wasserman Schultz’s leadership on the Democratic National Committee.

In a statement Sunday, Obama said the Florida congresswoman “had my back,” particularly during his 2012 reelection campaign.

The latest developments dealt a major blow to the Democratic party which was keen on projecting stability in contrast to the volatility of Republican candidate Donald Trump, who was formally nominated last week, and overshadowed preparations in Philadelphia for Clinton’s coronation as the Democratic nominee to face Trump in the Nov. 8 presidential election.