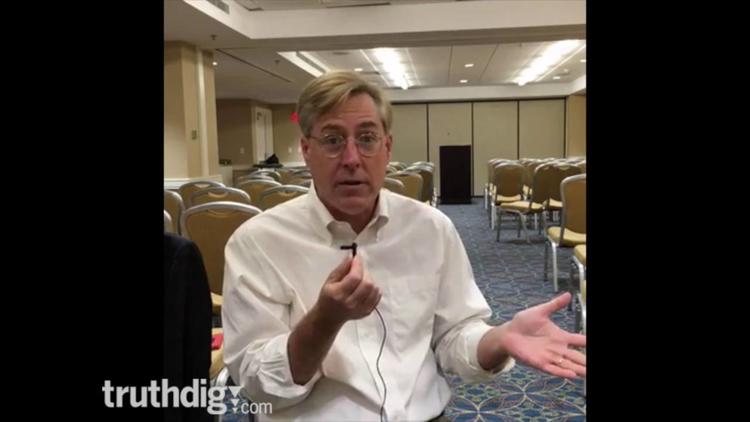 The Democrats ditched the working class in favour of a professional elite leaving Trump – a master of ‘resentment politics’ – to hoover up their votes. An interview with Listen Liberal! author Thomas Frank.

Now that the Republican Party has chosen a coiffured gargoyle as its nominee for president, the panicked eyes of the world turn to the Democrats, who have just selected Hillary Clinton at their national convention in Philadelphia. Author and historian Thomas Frank has seen his fair share of party conventions, having covered US politics for over 25 years. I spoke to him recently about his new book Listen, Liberal and the state of the union ahead of November’s election.

“The Democrats are not a Left party,” he tells me. “In fact there really isn’t one in the US.” Frank’s book is no broadside against liberals by a weary defector, but a Left critique of the Democratic Party. He charts its mutation over recent decades from being a workers party into the party of the ‘professional class’ – the experts, bankers, academics and tech-masters, who imagine themselves the natural winners of the great American lottery.

Frank names Hillary Clinton and Barack Obama as typical specimens – and since we spoke, the president has expressed an interest in working with “Silicon Valley and venture capital” after leaving office…

Does this mean there’s little to choose between the two parties? “They tend to have similar views on economic matters, but they come from different places. And they’re very different on the cultural issues – the abortion issue for example, the guns, for god’s sake. Some of these things are enormously important.”

He adds: “I would also say the Democrats are of course marginally better on things like the welfare state. But then again, as soon as I say that, as soon as those words passed my lips, Bill Clinton and welfare reform – a Republican could probably have never got that done, because the Democrats would have fought him to the death to stop something like that. But with Clinton doing it, it suddenly becomes okay.”

Frank’s book demolishes Bill Clinton’s presidency, the legacy of which is key to understanding the anger of this year’s campaign, from Donald Trump to Black Lives Matter, to Bernie Sanders supporters booing at the Democrats convention. Clinton’s dismantling of welfare, draconian criminal justice laws, job-exporting trade deals, and deregulation of Wall Street, have resurfaced as major issues in this year’s campaign – and not just because his wife is running for president.

“People look back on those years with such fondness now,” Frank says. “The things that he actually got done were awful things. I thought it was really important to go back and correct the record.”

Is Frank apprehensive about the prospect of Bill Clinton being back in the White House? “Well, unlike nearly everybody I know, I think I like Hillary more than I like Bill. I think she’ll be better than he was. But yes, of course I’m apprehensive about it.

“This is the sort of quintessentially American situation that we’re in here, where it’s a two party system, and given that, you have to constantly choose someone who’s not optimal for the situation, in order to avoid something that’s really dreadful. People like me are going to be voting for Hillary because Donald Trump is so frightening.”

Trump seems to have walked out of the pages of Frank’s earlier books, Pity the Billionaire and What’s the Matter with Kansas? – a silver-spoon demagogue railing against the ‘rigged system’ he has profited from and the ‘elite’ of which he is a member. His ability to hoover up votes from the Democrats’ natural constituency is partly explained in those books – Trump has mastered the resentment politics of the ‘culture wars’ – but as Listen, Liberal makes clear, the door was left open to him by the Democrats themselves.

“Trump has brought everything to a head,” he adds, “the fact that he’s got these working-class supporters. There’s a lot of contempt for these people. The Trump supporters are generally thought to be figures of idiocy.”

Given this, I asked Frank about the subject of those earlier books, the conservative ‘backlash’ critique of liberalism, which portrayed liberals as snobbish, well-educated, rich, and uncaring about working-class people. Was there more truth in that critique than he might have previously allowed?

“Conservatives have been saying this about Democrats for years,” he said, “but it’s never rigorous, they don’t really follow through, they don’t do their research. And their intention is always to show that liberals are in fact socialists, and that’s just completely wrong.

“So yes, there’s some validity to the conservative critique, but it’s so scattershot and wild, and it really misses the sociological reality of who these people are.”

Things are getting worse and worse for working people, and have been for quite a while in this country

One thing conservatives paper over – or did pre-Tea Party-and-successor-Donald Trump – is how economic forces, rather than a ‘liberal elite’, are kicking people in the rump every day.

“Things are getting worse and worse for working people, and have been for quite a while in this country,” says Frank. “We call it inequality, but it’s a much bigger problem than that implies. It’s the middle class coming apart, it’s working class people being unable to afford a middle class standard of living any longer.”

“A big part of the American population is in a state of decline,” he adds. “And they know it.

“People know that the standard of living they had in 2007 is never coming back, and they are upset about it – they’re very angry. But the impulse among liberals is to deny it. To say, look, everything is fine, the sky is blue, it’s a wonderful world out there. On paper, America is doing great. So turn that frown upside down.”

Frank is merciless about the ‘Let them eat cake’ brigade, and takes a scalpel to the self-serving idea of America as a meritocracy. “What you discover when you write about the professional class is that it is profoundly unaware of itself as a class,” he says. “They act like a class, and they do all these things that social classes do, but they don’t think of themselves as a class. They think of themselves as ‘the best’. We are who we are because we’re the smartest.”

A punk rocker at heart, (he wrote this book listening to Joy Division and Iggy Pop), Frank delights in blasting those living high on the hog – an instinct that gives him, as a Kansan who went on to get a History PhD at the University of Chicago, an edge over his liberal fraternity.

“I feel much more at home mocking professional class liberals than writing about people in Kansas,” he says. “I’m describing highly educated and prosperous people, people with every advantage, and people who are very familiar with ideas, and who nevertheless go through this pantomime with themselves. I had no trouble switching on the inner HL Mencken when I went to Martha’s Vineyard. I was completely at home mocking those people.”

As the gala of self-congratulation among Democrats continues, and will likely continue up to November and beyond, it’s worth recalling that their conceit – they who, having ditched working people, now use the threat of a President Trump to discipline those same people into voting ‘correctly’– is not just about place and position, but about moral superiority too.

“One of the rewards of being a liberal is you think you’re very virtuous,” Frank says. “Once you start digging though, this is a movement that is profoundly self-interested. They love to look in that mirror and think about how fine and noble they are. My objective is to put a crack in that mirror.”