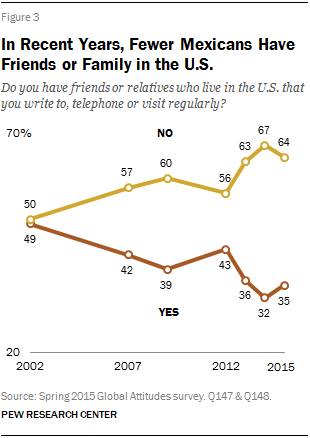 AP’s Fact Check found that as usual Donald Trump’s statistics in his GOP acceptance speech are way beyond the ‘damned lies’ level. So here are some illustrative graphs to suggest the level of his duplicity:

Actually violent crime including murder has fallen precipitously in the US since 1990. The murder rate is historically low, which means that year to year statistical fluctuations can easily be exaggerated. (Note that when you say things like ‘in the 50 largest cities’ it is a sign you are tinkering with the sample).

With regard to Mexican immigration, actually more Mexicans leave the US annually than come. A Pew Charitable Trust poll found some corroborating evidence that the wave of Mexican immigration in the 1980s and 1990s has long declined– fewer and fewer Mexicans say they have friends or family in the US:

Trump’s fixation on Mexican immigrants focuses on something that was an maybe an issue decades ago, when he still had normal hair.

Trump said, ““The number of police officers killed in the line of duty has risen by almost 50 percent compared to this point last year.”

This is simply not true. The number is up to 67 from 62. Every life is precious, and no police should be dying on the job, but the number of officers felled annually is quite low in a country of 320 million, and Trump is just making stuff up again. AP points out, “the 109 law enforcement fatalities in 2013 were the lowest since 1956.”

Trump said “My opponent has called for a radical 550 percent increase in Syrian (refugees). … She proposes this despite the fact that there’s no way to screen these refugees in order to find out who they are or where they come from. I only want to admit individuals into our country who will support our values and love our people.”

The percentage increase sounds so big because the US has been taking almost no Syrian refugees. The US has taken a iittle over 13,000, while Turkey has taken 2.5 million. The US Congress passed a Syria Accountability Act in the Bush era to destroy the Syrian economy and the US has armed and funded hard line Salafi rebel groups, so maybe we owe something to the 11 million Syrians we helped make homeless.

This was the situation until last November, 2015:

Refugees are intensively vetted in a process that takes 18 months to two years. Trump’s allegation that these people are not being vetted is a lie. Of some 750,000 refugees let into the US since 2001, only 10 have been found to have been involved in anything like terrorism, and that was usually a matter of sending money to the wrong group overseas. 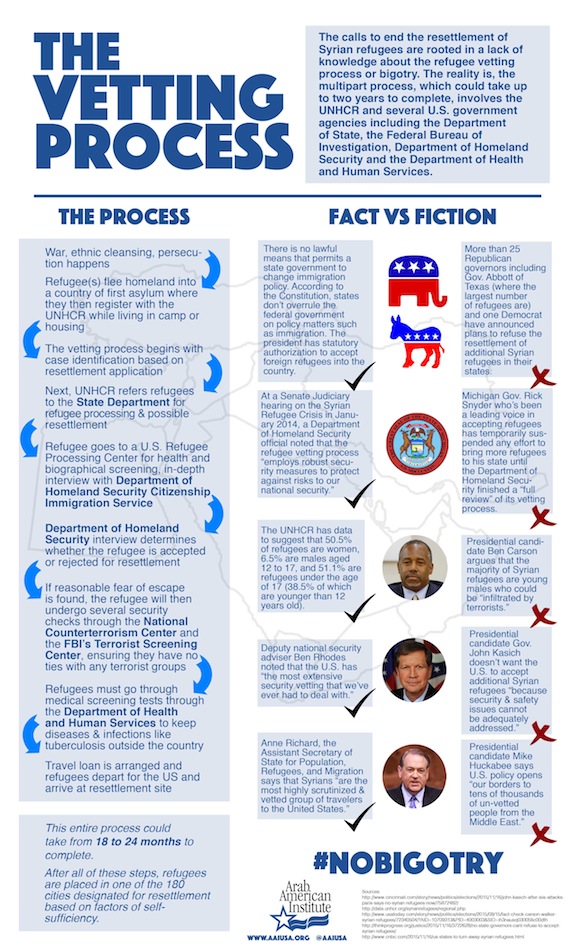