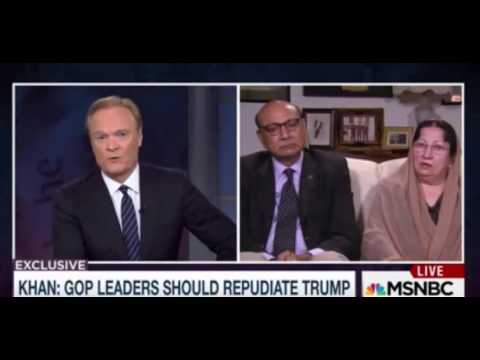 Donald Trump lashed out on Saturday against Ghazala and Khizr Khan over their speech Thursday night in which they criticized the casino and hotel moghul for his unconstitutional tirades.

The Khans said at the Democratic National Convention in a speech they crafted, that Trump had ‘sacrificed nothing’ for America. It was read by Khizr because his wife said she would break down if she had to talk about her son Capt. Humayun Saqi Muazzam Khan’s death in action in Iraq. The Khans are originally from Pakistan but came to the US in 1980 from the United Arab Emirates, where Pakistanis make up about 12% of the population. Khizr Khan did a masters in law at Harvard University and works as a legal consultant in Charlottesville, Va.

I never see anyone point out that some of those ‘great structures’ have been casinos, which are a way for the rich to steal from poor and middle class people. (Most games in a casino are rigged 8-11% for the house. If you keep playing, over time the house will end up with more and more of your money. Some games are rigged a third for the house. Gambling doesn’t help people– it redistributes wealth upwards, acting like a Robin Hood in reverse. That vast act of theft from people who can’t afford it is what Donald Trump gave as his sacrifice for the country.

Trump’s reply demonstrated that he simply cannot conceive of the idea of sacrifice. His response was about himself. How he worked hard. How many jobs he created. Hotels and casinos he had built. His success. How much he has done.

He did not say what he had sacrificed for the country.

Trump alleged that he avoided being drafted to serve in Vietnam because of a high lottery number. But by then he had had four college deferments and a medical examination that downgraded his eligibility because of a bone spur in his heel.

I don’t think you had to agree with the Vietnam War or want to serve in it to be a patriotic American (I didn’t, either). But I do think that not having served should make you cautious about making blanket criticisms of those who did and do. Trump dismissed Sen. John McCain’s sacrifices as a POW on the grounds that he was captured (implying that McCain is a yuuj loser.)

Trump attacked American Latinos as criminals, but they comprise 11.4% of those on active duty in our armed forces.

He doesn’t get to diss on Muslim-Americans like the Khan family, who gave us their son, Capt. Humayun Khan.

Trump implied that the Khans didn’t write their own speech. He attacked Mrs. Khan for not having spoken, saying maybe her Muslim family had kept her silent. (The Khans replied that she had felt too much grief over her son to speak publicly about his sacrifice, but had been key to crafting the speech). Trump clearly doesn’t know any Pakistani women.

Attacking a grieving mother with an easy racist piece of stereotyping was just about Trump’s speed.

Late Saturday Trump’s handlers managed to convince him to praise Captain Khan as “a hero to our country and we should honor all who have made the ultimate sacrifice to keep our country safe.”

But Trump has to square that statement with his assertion that Capt. Khan should have been kicked out of the United States or never allowed to come here in the first place, because of his faith.

Trump also remonstrated with Khizr Khan over his allegation that Trump hadn’t read the constitution. Trump insisted that he has.

But Mr. Khan did not say Trump had not read it. He asked Trump if he had read it, and offered to share his own copy.

The Donald still doesn’t get it. Khan is not interested in merely reading the document. He is talking about abiding by it. He was implying that Trump makes one unconstitutional proposal after another, in contravention of the constitution.

The constitution forbids cruel and unusual punishment. Trump wants to torture people with blowtorches to the genitals.

The constitution forbids a religious test for office and forbids Congress from installing or ‘establishing’ an official US religion that would be favored above others. The 14th Amendment mandates equal protection of the law to all Americans. Trump wants to ban Muslims.

Khan’s emphasis on the constitution shows that he thinks the idea of America is rooted in a rule of law. It is rooted in duty to country. It is rooted, as well, in principled dissent, as he demonstrated in his speech.

Trump dismisses the rule of law. Indeed, he is a serial scofflaw, as with his phony university and other scams. Trump displays no sense of duty to country and never has. He clearly wants to be president to stroke his own ego. And, Trump’s discourse is at the level of a self-absorbed five-year-old, so he wouldn’t recognize principled dissent if it ran him over in a Mack truck.

The Muslim Khans are a thousand times better Americans than Trump will ever be, because they understand what America is about, and because one of their own made the ultimate sacrifice. If we have to expel somebody, as Trump insists, I know which I’d choose.