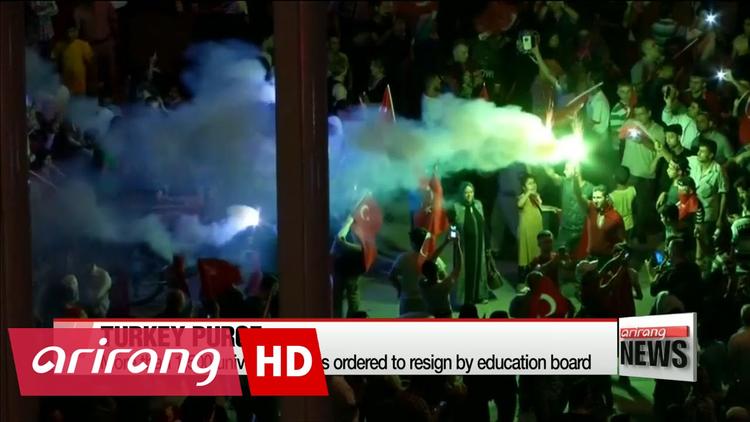 Turkish President Tayyip Erdogan’s firing of some 50,000 people, including educators, bureaucrats, police and military personnel, in the wake of the failed July 15 coup against him, provoked sharp criticism in Egypt, Jordan and other Arab countries that have an adversarial attitude toward the Religious Right such as the Muslim Brotherhood. Erdogan has typically been an ally of the Muslim Brotherhood and its offshoots, and this secular/ religious politics split seems to account for the differences in how his actions are seen in various Arab countries.

In Egypt, Husain Yusuf of al-Yawm al-Sabi` (The Seventh Day) lambasted Erdogan. He said that the president’s interview on Wednesday on Qatar’s Aljazeera was intended to whitewash his dictatorial actions. Yusuf says that Erdogan is attacking everyone he perceives as an enemy, violating human rights, and pursuing a politics of exclusion. He slammed Erdogan as “Turkey’s Hitler.” He also criticized Erdogan for his diatribe against the Egyptian press coverage of the coup and its aftermath, saying that Erdogan appeared to be demanding that the Egyptian press just take the government line and ignore the “massacres” Yusuf says Erdogan’s government has committed against his opposition. In contrast, Yusuf maintained, the Egyptian press has just reported the facts in a dispassionate manner.

Yusuf says that Erdogan is hypocritical, since his government had sharply criticized Egypt for implementing a state of emergency in the Sinai Peninsula, while Erdogan has put all of Turkey in a state of emergency for at least three months. He said Erdogan despises Egypt because the country virtually ignores him.

Bassam Ramadan, writing in al-Masry al-Yawm (Egypt Today), quotes Egyptian observer Mustafa al-Fiqi that Erdogan is preparing to become a new dictator. He said Egypt’s overthrow of the previous government was completely unlike that in Turkey, since Egypt’s masses came out in favor of the military.

But actually, of course, the coup by Abdel Fattah al-Sisi in Egypt and the counter-coup by Erdogan in Turkey look very similar in the firings, jailings and other tactics used.

“Many writers, especially from Egypt and Jordan criticised Erdogan’s decisions that directly affected more than 45,000 people, accusing him of trying to fully control the county and get rid of any sort of opposition. Some also described the coup as a play that aims to strengthen Erdogan’s reign.”

Another writer in the pro-government al-Yawm al-Sabi`, Abdel-Salam, wrote that “The European confusion in front of Erdogan’s policies will definitely make him a new Hitler with new weapons”.

In Jordan’s Al-Rai newspaper, Sameh al-Mahariq wrote, “What is happening now is political utilization of the coup to benefit Erdogan; a golden chance for that enabled him of launching a wide purging campaign.”

The Syrian al-Thawra (Revolution) had a piece speculating that more significant coups are on their way in Turkey.

The Gulf press was primarily interested in what the coup attempt might mean for Turkish-Iranian relationships and for themselves.

In the Kuwaiti government-owned centrist Al-Watan, Abdullah al-Hadlaq wrote, “The Iranian Persian regime is scared, terrified and frightened from the possibility of the military coup in Turkey being contagious…” He predicted that such a coup is coming in Iran.