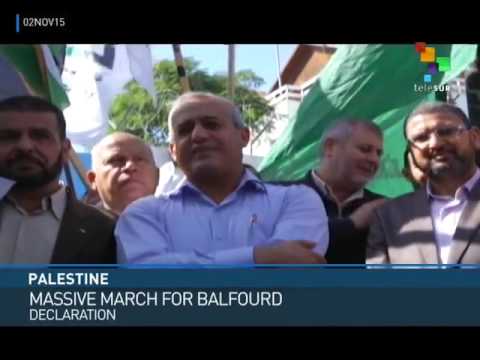 BETHLEHEM (Ma’an) — Palestinian Foreign Minister Riyad al-Maliki urged the Arab League to help the Palestinian Authority to sue the United Kingdom over the Balfour Declaration of 1917 on Monday.

Speaking on behalf of Palestinian President Mahmoud Abbas, al-Maliki delivered a speech Thursday at the Arab League’s annual summit, which is being held this year in the Mauritanian capital of Nouakchott.

Al-Maliki apologized on behalf of Abbas, who couldn’t attend the summit due to his brother’s recent death, before urging Arab countries to “help us bring a suit against the British government over the ominous Balfour Declaration which resulted in the Nakba (catastrophe) for the Palestinian people.”

Nearly a century ago, a letter sent from British Foreign Secretary Arthur James Balfour to Baron Rothschild, a British Jewish leader, declared British support for the “establishment in Palestine of a national home for the Jewish people.”

Palestinians have since viewed the declaration as paving the way for the creation of the State of Israel at the expense of the land’s original inhabitants.

The declaration was made before the British had wrested control of Palestine from the Ottoman Empire, and was not made public until several years after the World War I, in 1920.

By that time, Britain had been formally granted a mandate over Palestine by the League of Nations, and was struggling with its contradictory obligations of “rewarding” Arabs for their support during the war, while also fulfilling their pledge to create a Jewish state.

After World War II, British forces withdrew from Palestine, leaving it in the hands of the newly created United Nations, which favored partition, particularly as evidence slowly emerged of the vast scale of the Holocaust in Europe.

The decision led to the 1948 war between Arab nations, including Palestinians, and Jewish immigrants, ultimately resulting in the creation of the state of Israel and the expulsion of more than 700,000 Palestinians from their homes inside its borders, an event known as the Nakba among Palestinians.

In February, the Palestine Liberation Organization said in a statement that Great Britain bore “the primary responsibility” for “historical injustice in Palestine.”