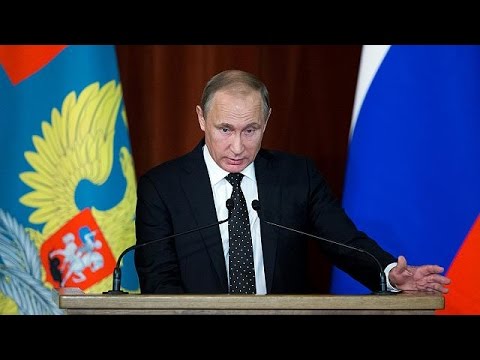 Vladimir Putin was the skunk at the party in the West after his annexation (or repossession, depending on how you look at it) of Crimea. Europe declared that borders cannot be changed by fiat or troops. The US pressed for heavy sanctions.

The Russian intervention in Syria, primarily against al-Qaeda and to prop up the regime of Bashar al-Asad, substantially changed the conversation. The intervention was criticized for not focusing on Daesh (ISIL, ISIS) but rather on the northwestern front that is dominated by al-Qaeda in Syria (the Nusra Front) and its allies. Some of those de facto allies are “vetted” groups that receive CIA arms via Saudi Arabia, and Russia occasionally bombed them along with al-Qaeda.

Then last fall as Russian airstrikes coordinated with the Syrian Arab Army pushed al-Qaeda to the far north of Latakia Province toward the rugged Turkish border, and endangered Turkmen rebels against the Syrian regime that had made a battlefield alliance with al-Qaeda.

Turkey is backing these Turkmen rebels, who speak a language close to that of Turkey itself and who have adopted a strong Muslim fundamentalist ideology. It was unacceptable to Ankara that Russia was bombing them to smithereens and defending the al-Assad regime. So the Turkish air force shot down a Russian bomber.

In the meantime, the US CIA and its Saudi ally continued to funnel weapons to the remnants of the Free Syrian Army, most of them Muslim Brotherhood, even as at least a few of them continued to cooperate with al-Qaeda on the battlefield.

Putin reacted to Turkey’s startling attack on its air force by pulling out Russian tourists and forbidding charter flights to Turkey. Some 5% of the Turkish economy is tourism, and some important portion of that is Russian tourists. Suddenly, Antalya on the Mediterranean coast was a ghost town. Putin also cancelled some other forms of economic interchange, even down to vegetables.

Turkey’s president, Tayyip Erdogan, seemed surprised that Putin would react this way to the shoot-down (Russia also suffered from these forms of economic boycott). But he persevered in his Syria policy, of trying to overthrow al-Assad and of supporting fundamentalist rebels.

This week both Turkey and the US came to Putin to deal.

Turkey apologized for shooting down the Russian bomber. And in response, Putin lifted the ban on tourist charter flights. All this was in the works already, possibly brokered by Israeli prime minister Binyamin Netanyahu. But Russians’ return to the beaches is now especially important. If any Russian tourists now come back to Turkey, they will be especially welcome given the Istanbul airport attack, which will drop tourism like a stone.

Then President Obama offered to share US intelligence on the whereabouts of al-Qaeda, the Nusra Front, if Russia would promise to stop bombing US-backed rebels. (Russia maintains that the latter are so closely intertwined with al-Qaeda that it can’t distinguish the two from the air).

All this does raise the question of why, if the US has such good intelligence on al-Qaeda in Syria, it isn’t bombing the group itself. After all it pledged allegiance to Ayman al-Zawahiri, the mastermind of the September 11 attacks. Sec. Kerry has admitted that it has proved difficult to separate the US-backed fundamentalists from al-Qaeda. Maybe it is just me, but maybe that is an indication that the US should change its policy.

In the poker game being played in Syria, Russia now has the winning hand.