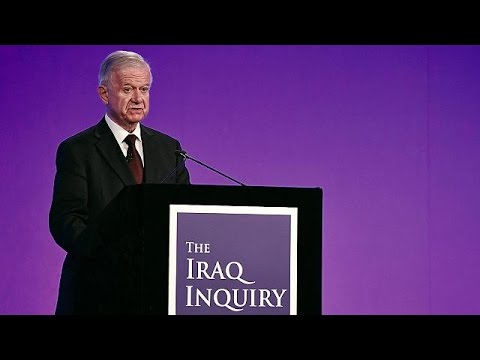 I won’t disguise my impatience with the of the Chilcot Report on Britain’s involvement in the 2003-2016 Iraq War. Most of it comes as no surprise to me. I chronicled it at the time, and it wasn’t actually hard to find information about shenanigans if you looked hard enough.

This was not a noble war.

Our predecessors in the twentieth century experienced the two World Wars, which killed on the order of 75 million people. In 1945, world leaders were determined not to repeat that experience, and they crafted the United Nations charter in order to forestall it. They determined that aggressive warfare would not be permitted. Hitler’s invasion of Poland was sheer aggression. Japan’s conquests in Southeast Asia were pure aggression. Of course, the Japanese just did to what is now Indonesia in a short period of time what the Dutch had done to it over centuries. The Dutch were fully as brutal in Aceh as the Japanese were when they took over.

The post-WW II order, if it was to give up aggressive warfare, also had to give up colonialism, which it gradually for the most part did (the French let Morocco and Tunisia go but tried to hold on in Vietnam and Algeria, with disastrous consequences).

The Security Council shall determine the existence of any threat to the peace, breach of the peace, or act of aggression and shall make recommendations, or decide what measures shall be taken in accordance with Articles 41 and 42, to maintain or restore international peace and security.

In other words, it is the Security Council that decides if an international trouble spot should be responded to by war. The Chilcot Report shows that George W. Bush had no intention of even seeking a UNSC authorization, and Tony Blair was among those (along with then Secretary of State Colin Powell) who convinced Bush that just falling on Iraq with no pretense of an international process would look bad.

But despite threats and secretly proffered bribes, Bush and Blair were not able to browbeat the UNSC into authorizing the war. They blamed France, but it wasn’t just France. If the UN General Assembly had voted, Bush and Blair would have lost very badly. The world couldn’t be convinced that there was a casus belli (legal justification for war) here.

The UN Charter also allows immediate action to defend oneself. But although Iraq had invaded Iran and Kuwait in 1980 and 1990 respectively, in 2002 it was minding its own business and had not attacked either the US or Britain.

Despite the leading US role in crafting it, the US political establishment has for the most part seen the UN Charter as a detraction from US national sovereignty, and after the fall of the Soviet Union, Washington gloried in being the sole superpower. The US is a very nice country, but it has a long history of aggressive warfare, and even today suggesting at a Georgetown cocktail party that the US is in any way constrained by international law is to risk a lot of wry knowing grins.

Some would argue that sometimes in the real world the UNSC gets hung up because of the veto of the 5 permanent members, and you have to go around it. But in this case, Bush couldn’t even get NATO to want to go around it. There was no consensus. Bush met with Blair and the Portuguese and Spanish presidents before launching his war, because apparently those were the only European countries he could find to support him.

So that’s it. You don’t need anything else. The Iraq War was an act of pure aggression, no different in moral or legal standing from Hitler’s invasion of Poland. That is what Bush and Blair made themselves. Small Hitlers, betraying all the hopes of the generation of 1945, which dreamed of forestalling further such atrocities.

Had the war been launched in response to Saddam Hussain’s own attack on Iran in 1980, and had there been a consensus at the UNSC for such a move, it could have been justified. But in 2003 there was no international emergency calling for such a war. The level of Western hypocrisy can be measured, however, by the lack of any move to punish Iraq for invading Iran and starting an 8-year war that killed hundreds of thousands. Worse yet, the Reagan administration actually swung behind Iraq in 1983, allied with Saddam, and shielded him from charges brought by Iran to the UNSC that he used mustard gas and perhaps Sarin on Iranian troops at the front. And then the Reagan administration authorized the sale to Iraq of precursors for anthrax. The joke in 2003 was that Bush was asked how he knew that Iraq had chemical and biological weapons, and he responds, “We still have the receipts.”

There are those, whether pacifists or persons of the left, who believe that all military interventions by Western powers should be opposed. For the leftists, this position seems ahistorical, since even Stalin was glad enough to ally with the American bourgeoisie against Hitler’s murder machine. Stalin was pretty far left. As for pacifism, it faces the moral challenge that St. Ambrose brought up, which is if you let a third party be killed when you could have stopped it, you are as guilty as the murderer.

Those who argue that the Iraq War has been a disaster are correct, but that in and of itself is no reason to have opposed it. The Gulf War of 1991 that pushed Saddam’s forces back out of Kuwait had several downsides. Thousands of Shiites were massacred in the aftermath, and tens of thousands of Kurds were at risk of starvation or genocide. But the Gulf War was a just war. It protected Kuwait, a UN member, from being aggressively absorbed by another state. It garnered strong international support, including a UNSC resolution. The army George H. W. Bush assembled in the Saudi Eastern Province included fiercely independent countries such as Syria and Argentina.

So you can’t argue that Blair did the wrong thing because the outcome has been a disaster.

He did the wrong thing because what he did was illegal in international law. Moreover, his methods were dishonest. He lied to his own cabinet, and he hid from them the possibility broached by his own Attorney General, that they could be prosecuted at the Hague for launching a war of aggression. He also lied to the public, repeatedly saying he hadn’t decided on war when he long since had. He also got pressure from BP the oil company, which was afraid Britain would be cut out of new Iraqi oil deals by the Americans. He has never spoken about this.

The Bush-Blair war of aggression in turn authorized many others, and other countries have sometimes openly cited the Iraq War as justification for their own belligerence, or as proof that the West lacks legitimacy when it criticizes the aggression of others. To the hundreds of thousands dead in Iraq, the millions wounded or displaced, must be added the toll from the “wars of choice” W. unleashed on the world.