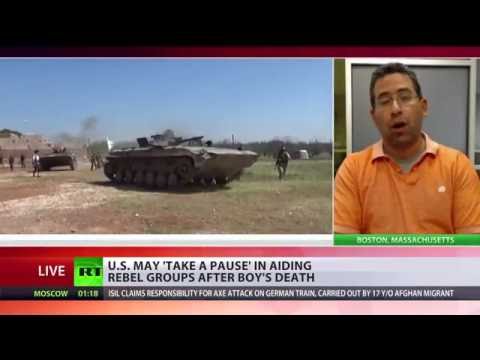 The killers claim to be fighters om a rebel group that has received both financial and arms support from the United States and allies.

A disturbing video circulating online shows an alleged group of U.S.-backed Syrian rebels beheading a Palestinian boy who they accused of being a fighter loyal to President Bashar al-Assad.

The footage first shows the terrified child, who is ostensibly under the age of 12, surrounded by fighters in the trunk of a pickup car. A knife-wielding man then beheads the boy, who is laid down on the trunk with his hands cuffed.

The executioner shouts “Allahu Akbar” (God is great), holds up the boy’s head, then put it down on his back.

The militants claimed to be fighters from the Nour al-Din al-Zenki Movement, an armed Syrian opposition group that has received both financial and arms support from the United States, as well as Turkey, Qatar and Saudi Arabia.

Militants arrested and killed the child near Handarat Refugee Camp in northern Aleppo, for allegedly being a fighter of the Palestinian Liwaa Al Quds (Al-Quds Brigade), a pro-government militia currently active near that war-torn city.

Meanwhile the U.S. State Department said it may reconsider its affiliation and support for the Syrian opposition if the gruesome video of the death is true.

The group is considered by the Syrian, Russian and Iranian governments to be a terrorist organization and has not been included in any truce or ceasefire deal.

The armed conflict in Syria began in 2011 and the United Nations has confirmed that over 400,000 people have been killed along with millions of people displaced.​

Related via added by Juan Cole:

RT: ” US may ‘take a pause’ in aiding Syrian rebels after beheading of Palestinian boy”