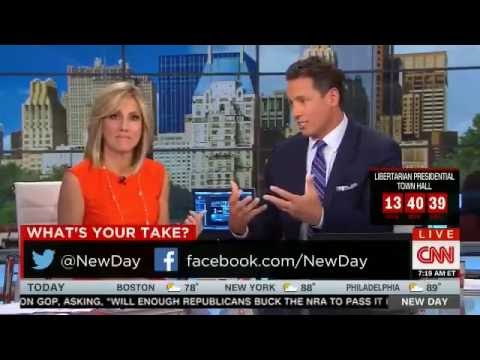 Rep. Steve King objected to a comment during a cable news discussion at MSNBC that this will be the last election dominated by old white people.

”
Rep. Steve King (R-Iowa) offered an unusual defense of the racial homogeneity of his party during a panel on MSNBC Monday evening.

The group, led by Chris Hayes, was discussing the first day of the Republican national convention and Donald Trump’s history of racially-loaded comments and behavior. King told Hayes that he thought Trump had “modified” his behavior in that regard, but Esquire’s Charlie Pierce said he didn’t see much diversity reflected in the gathering itself.

“This ‘old white people’ business does get a little tired, Charlie,” King said. “I’d ask you to go back through history and figure out, where are these contributions that have been made by these other categories of people that you’re talking about, where did any other subgroup of people contribute more to civilization?”

There are lots of basic things wrong with King’s statement, even just starting with his category of ‘whiteness’. Whiteness is not ‘natural’– it is an invented category. Were Irish white? A lot of English didn’t think so. “Whites” rioted against Greek immigrants to the US. White supremacists still argue over whether to let in Italian-Americans. Me, I don’t want to be called white and I decline that categorization whenever the government or other people with questionnaires will let me. The Appalachian side of my family probably has some Melungeon to it and some of us aren’t all that ‘white.’

As for civilization, there are lots of kinds. Archeologists were shocked to discover that African villagers did sophisticated iron-working around the time of Jesus, even though they didn’t have big cities or other infrastructure. They were just good at smithing and the technology needed for it.

If by civilization is meant urban society with high rates of literacy, scientific and technological innovation, role specialization and division of labor, and high levels of collective government, then northern European Christians did not invent it.

Iraq, Iran, India, China and Egypt did. The Sumerians, Babylonians, Assyrians, Elamites, Persians, Indians, Chinese and the Pharaohs of Egypt had civilization for thousands of years while Celts in Britain were painting themselves blue and doing hunting and gathering in the wastes.

Sanskrit gave us our numbers, otherwise we’d be doing long division of IX into XXVI. The Arabs and Iranians at the court of the Abbasid caliphate added the zero, and invented algebra and algorithms (named for al-Khwarizmi, an Iranian Muslim mathematician). Omar Khayyam, an Iranian, pioneered using geometry to solve algebraic problems. Muslims gave us the latteen sail and a whole host of other key inventions. Chinese science in the Song period (late medieval) was so far ahead of the rest of the world that others probably did not catch up until 1750 or so. Ancient Indian astronomers were likewise way ahead of their peers in Europe of the day.

As for Christianity, while it could not be proved to cause the fall of the Roman Empire in the 400s of the common era, it is certainly the case that Greece and the Roman republic were huge successes when pagan, but went into a tailspin only a century after Constantine imposed a Middle Eastern monotheism on the empire. There doesn’t seem to be a connection between Christianity and civilization. There were some negatives. Christian know-nothingism of the Tertullian sort put paid to high philosophizing in Western Europe for centuries, with deep damage to science and innovation. Abbasid caliph Haroun al-Rashid was debating Aristotle at court while Charlemagne, lord of a few muddy villages compared to the splendors of Baghdad, was desperately trying to learn to write his name.

Western Europeans and North Americans got slightly ahead of the rest of the world with regard to gross domestic product and scientific innovation from about 1750, but this should not be exaggerated. Even as the people at the center of an empire, most Portuguese were poor, and likely poorer than the Indians they hoped to rule. It certainly had nothing at all to to with Christianity. Some of it was the ‘ghost acreage’ of slavery and colonialism, which produced economic ‘cream’ for white society beyond subsistence that got invested and had a multiplier effect.

But there is another critique of what King said, which is that our model of civilization may be very damaging. It is after all a high-carbon enterprise that produces masses of pollution. It may have endangered our species with its carbon emissions. A less ‘civlized’ life like that of pre-European Native Americans would certainly have been in greater harmony with the environment.