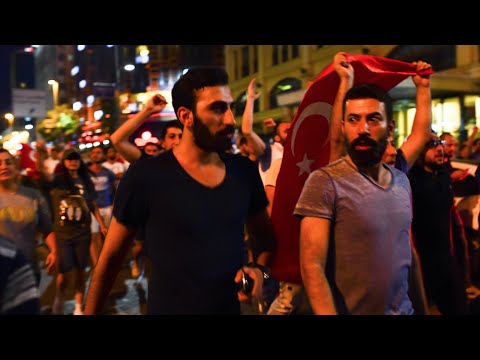 The poorly planned junior officers’ coup in Turkey on Friday appears to have failed as I write late Friday night, though rebel military elements still hold positions in some parts of the country, including Ankara, the capital. Their allegiances and motives are still unclear.

Remarkably, among the reasons for the failure was the determined stance of the Turkish people who stood up for their democracy, even if about half of them deeply dislike President Erdogan.

Crowds came out into the streets in Istanbul and Ankara. Individuals stood or lay down in front of tanks.

Some civilians even arrested mutinying troops!

After the military faction took over state tv, crowds invaded the station and allowed its anchors to come back on line.

An army faction and street crowds battled back and forth for control of the offices of CNN Turk, and could be heard on live feed even as the cameras showed an empty room.

Although in the nature of the case many of the members of such anti-coup crowds were drawn from the ranks of partisans of the ruling Justice and Development Party (AKP), others hailed from the student movement of 2013 that mobilized over preserving Gezi Park, and who had been repressed by the Istanbul police.

I protested erdoğan during gezi. I was tear gassed by his police. I think akp is trash. but I support them against a fascist military coup.

Moreover, the major opposition political parties all came out against the coup.

The party with the greatest reason to resent Erdogan is the pro-Kurdish Peoples’ Democratic Party (HDP), whose members Erdogan is attempting to expel from parliament. He had a law passed taking away their parliamentary immunity in preparation for just that step. When they won 13% of the vote last summer, Erdogan engineered a second election to attempt to lock them out of parliament (you need 10% of the vote to be seated). The president appears to have deliberately broken off the peace process with the PKK and ramped up a war on separatist, leftist Kurdish guerrillas (who were not blameless since they were attacking Turkish security forces), in hopes of cutting into the HDP vote by promoting Turkish nationalism and anti-Kurdish sentiment. Even though Erdogan has played them about as dirty as you could play other politicians, Sabah reports that

“In a joint written statement, People’s Democratic Party (HDP) co-chairs, Selehattin Demirtaş and Figen Yüksekdağ, said no one replaces himself as the national will. “HDP takes a stand against every coup in every condition. . . There is no way beside protecting . . . democratic politics.”

Another party that despises Erdogan is the centrist, secular Republican People’s Party (CHP). As leader of a center-right pro-Muslim party, Erdogan is everything the CHP stands against. They don’t like his pro-Muslim Brotherhood foreign policy, his support for Hamas, his intervention in Syria. They don’t like his encouragement of religious symbols and practices on state property, which they see as sectarian. Uncharismatic CHP leader Kemal Kılıçdaroğlu said that the “Community should give joint reaction to every coup attempt . . . This country was wracked with coups. We do not want to go through the same troubles. We’ll protect our republic and democracy; keep our commitment to the free will of our citizens . . . So, whoever does, wherever it comes, we should take a joint stand against the coup as we take a joint stand against terrorism.”

Those are the three other most powerful parties in the country aside from the Justice and Development Party of Erdogan itself, which holds 50% of the seats in parliament and so was able to form a government without coalition partners. They all firmly rejected the coup.

Ironically, Turkish democracy is in deep trouble. President Erdogan looks at the system as an elective dictatorship– the only role of the people is to vote in a regular referendum on him and his party, after which they should demobilize and let him do as he will. No one, he says, has a right to criticize an elected leader who represents the will of the people (Rousseau meets Ottomanism). Erdogan has mercilessly cracked down on the press, jailing journalists for reporting news he didn’t like.

Even under these circumstances, the Turkish people rejected a military take-over, across the board.

People power has often helped return the military to the barracks after a coup, as with the protests in Pakistan in 2007 over Gen Pervez Musharraf’s tinkering with the Supreme Court, which forced him to step down in favor of a democratically elected government. But this Turkish moment is important because it didn’t just end a military dictatorship, it helped nip one in the bud.

Bloomberg: “Crowds Take to the Streets in Turkey, as Army Attempts Coup”