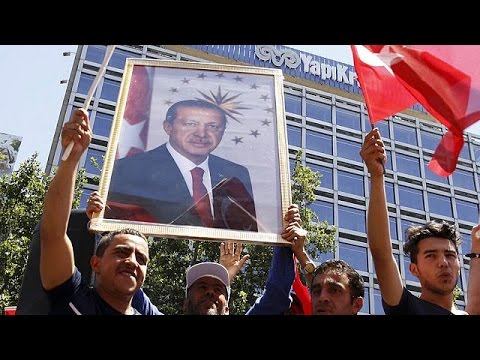 President Tayyip Erdogan is taking advantage of the failed coup against him to purge the judiciary and security forces of anyone who is lukewarm toward or actively critical of him.

These steps are, of course, the opposite of the ones Erdogan should be taking– he should be attempting to bring the country together in unity and to re-include in the polity those he has isolated and excluded in recent years. Instead, he is scapegoating and purging.

Erdogan characterizes this purge as against the secretive and cult-like Gulen movement, one element in Turkey’s landscape of the religious Right. He blames the Gulen movement for the attempted coup, though its leader (in exile in Pennsylvania), Fethullah Gulen, denies the allegation.

Erdogan has suspended 2745 court judges suspected of ties with the Gulen movment. These judges cannot be shown to have been involved in the coup, but Erdogan’s secret police apparently suspect them of Gulen tendencies. This is a purge, not justice.

Erdogan pursued the purge in the ranks of the military, as well.

Erdogan’s pro-Muslim coalition that began coming to power in 2002 included a number of constituents on the religious Right. These were small town and rural Muslims who felt excluded by the secular elites of Ankara and Istanbul. Some were small organized groups such as the Naksibendi Sufi orders, others were vaguer circles of Muslim entrepreneurs.

One of the larger groups was the Neo-Sufi Hizmet movement. Sufi Islam centers on visits to tombs of saints in search of blessings, figurative interpretation of scripture, the “warm heart” of ecstatic worship, group chanting or dancing, search for union with God, and loyalty to the mystical leader. The Gulen movement updated Sufism for Muslim modernist purposes. In a modern society, some aspects of Neo-Sufism look a lot like a cult, including the demand for unquestioning obedience to the leader and forms of corporate solidarity.

Here is an entry on it (scroll down):

It appears that, rather on the model of Stalinist cell formation, the Gulen movement has focused on getting its members into key positions in the Turkish government, including the police, army and judiciary, and possibly the intelligence services.

Gulen is alleged to have told a gathering in 1999:

“You must move within the arteries of the system, without anyone noticing your existence, until you reach all the power centres … You must wait until such time as you have got all the state power, until you have brought to your side all the power of the constitutional institution in Turkey.”

The movement maintains that the tape was doctored, but that should be easy to prove.

They have also surreptitiously funded trips to Turkey for many in Congress.

They secretly gathered dirt on Erdogan and his associates, though the public just yawned at the revelations.

Since Erdogan broke with Gulen a few years ago, he has been convinced that the Hizmet members are still secretly positioned in the government and plotting against him. He sees the failed coup as a reasonable grounds on which he can polish off his critics and brand them as dangerous cultists. But democracies require loyal oppositions. Erdogan needs his critics, and they should not be prosecuted or fired if they haven’t committed a criminal act.  (If someone is found to be acting criminally by posing or engaging in illegal wiretaps, then fine).   Just firing people en masse for “sympathies” is contrary to every human rights norm– it is the creation of thought crimes.  That path is a slippery one, and Turkey has already lost its footing.