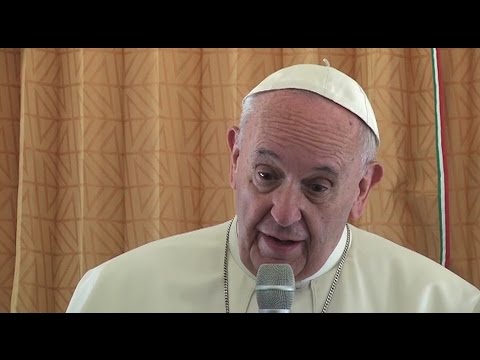 AFP reported from the papal airplane on Pope Francis’s remarks about Islam in the wake of the brutal murder of an elderly priest by two teenagers of North African heritage in Normandy last Tuesday. Daesh (ISIS, ISIL) claimed responsibility.

“It’s not true and it’s not correct (to say) Islam is terrorism. . . I don’t think it is right to equate Islam with violence”.

Pope Francis continued, “In almost every religion there is always a small group of fundamentalists. We have them too . . . If I have to talk about Islamic violence I have to talk about Christian violence. Every day in the newspapers I see violence in Italy, someone kills his girlfriend, another kills his mother-in-law, and these are baptised Catholics.”

The pope said four things here that will be unwelcome to the right wing politicians in Europe and North America.

1. He said that Islam is not intrinsically a driver of terrorism. This is obviously true, since most Muslims in most times and places have been perfectly peaceful people.

2. He made a distinction between the 1.5 billion adherents of Islam in the world and the tiny fringe that commits acts of terrorism.

3. He pointed out that the same small fringe of violent people exists in the ranks of Roman Catholics, as well.

4. He put the murder of the priest in Normandy on the same plane as criminal murders committed by Catholics in Italy. That is, he did not privilege “terrorism” as an metaphysically distinct category of violence, but put it under the sign of criminality.

No more succinct and sensible statement of the case could possibly be made, and you marvel at the combination of intellect and deep ethical insight of this man.

One could go further and mention that the precepts of Islam actively forbid murder and terrorism. The Qur’an cites Jewish traditions that to murder one person is like committing genocide against all humankind. A single murder, the Qur’an maintains, is equivalent to an extinction-level event. Killing innocent civilians, the very definition of terrorism, is first and foremost murder.

That Christians commit terrorism on a large scale is very clear from recent history. As many acts of terrorism are committed in Europe by far right wing European nativist groups, some with a Christian heritage, as by Muslims. Christians have managed to tag fascism as a neo-pagan or secular movement, but it was often deeply intertwined with the Church. Although the Irish Republican Army was disproportionately Marxist, it had priests and believing Catholics among its operatives. (Irish may have had good reason to be dissatisfied with British policy, but that did not give them a right to bomb Harrod’s department store and kill innocent shoppers). To support Pope Francis’s point, here are 8 Christian terrorist groups every bit as scary as anything in the Middle East.

As for seeing terrorism as a form of criminality, you can only hope that legislators and law enforcement will listen to him. In the US we have on the order of 16,000 murders a year, with only a handful committed by terrorists. In fact, distinguishing some murders from terrorism is very difficult, because many killings have some sort of political or ethno-nationalist dimension– which is the definition of terrorist violence.

By placing terrorism on a pedestal and annointing it as some sort of metaphysical category that trumps all other forms of violence, we are regrettably wasting precious resources and militarizing our police (leading to the alienation of whole communities from police who dress like military commandos.) Murder is murder, and the life of each victim is equally precious.

Meanwhile, in response to the murder of the priest in Normandy by the teen-aged Daesh, some 2,000 French Muslims attended Catholic mass in solidarity on Sunday.

In today’s charged Islamophobic atmosphere, unfortunately Muslims are obliged to make such gestures. For their own good, they have to become more extroverted and more involved. Many Muslims in Europe and North America are first and second generation immigrants, who have a tendency to keep their heads down and their noses clean. They often come from dictatorial societies where you stay out of trouble by keeping quiet.

But in our increasingly demagogic societies in the West (Aristotle said demagoguery is the
corrupt form of democracy), you stay out of trouble by speaking out. If you are silent and timid, people will try to use you for their political purposes. Most of these hatemongers are cowards, though, so if you let them have it they back off. That is why Khizr Khan’s speech was so powerful– he showed that as an immigrant he had no fear of speaking out publicly against the powerful and wealthy leader of one of our two major parties.

Muslims need to do things like attend Christian services and engage in interfaith dialogue more than they do (I know a lot of Muslims are very active in these fields, but they are a small minority). Opinion pollings shows definitively that Westerners who know a Muslim are much less likely to be Islamophobes.

And Christian leaders need to speak out more, as Pope Francis does, on behalf of Muslims. the Muslim-haters among Christians should contemplate Matthew 5:

A lot of Christian leaders on the Right are calling their fellow human beings, the Muslims, a lot worse than ‘fool’ So we know where they’re headed.

Rome Reports: “Pope Francis, following the recent attacks: It is not a war of religions. Religions want peace”